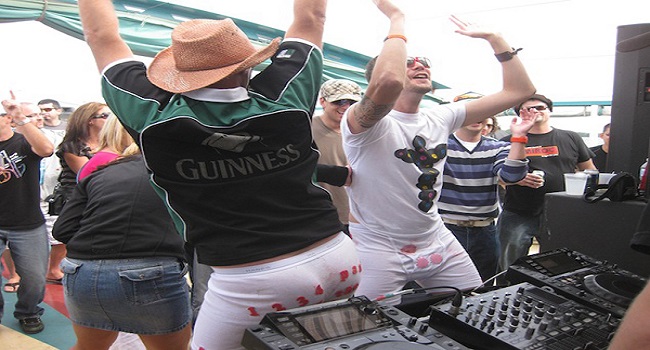 We all have those songs that instantly trigger fond memories of our youth. Just a mere few cords from a guitar can take us back to the song that played on the radio during the moment of our first kiss. Some vocal harmonies remind us of that long summer road trip in our friend’s old Ford Tempo. The pulsing beat of a particular dance song recalls that party in which we were convinced the collective euphoria actually made time stand still. Through the many twists and turns that life has to offer, music has always been something that reminds us and comforts us.

It is this personal soundtrack that we subconsciously create that is at the heart of Courtney James’ film The Global Groove Network. The film examines the rise of dance music from its early disco roots in the 70s all the way to the mainstream success that it receives today. The Global Groove Network consists of three facets that work together in unison: the promoters, the party goers, and most importantly the DJs. As electronic music and the dance culture evolves and grows in popularity, a new form of celebrity is born. The architects behind the unique and captivating sound, the DJs, have become household names.

The rise of the DJ culture and how it has shaped the world globally is at the heart of James’ film. The Global Groove Network truly hits its stride when it is focusing on the DJs themselves. Featuring the likes of Armin Van Buuren, Pete Tong, David Morales, ATB, Miss Honey Dijon, Colette, Anthony Attalla, and James’s personal hero DJ Dan, the film has no shortage of experts to pull from. James explores how these DJs, and many others, help to expand on the community aspect that dance music thrives on. We are provided insight into the thought process many of the DJs go through when it comes to creating music and playing for a live crowd.

Hearing the methodology that many of the artists have towards the correlation between the music and the audience is both fascinating and surprising at times. While some like Miss Honey Dijon compare DJ sets to the various stages of “oral intercourse;” others such as DJ Dan share the difficulties of choosing between a song that might be right for the crowd versus a song that mixes better with the track currently playing. As James astutely points out, there is a science to not only what DJs do, but how they interpret music in general. However, the film is not merely an ode to DJs and dance music, but a personal history for James as well.

As is documented early on in the film, Courtney James always had a strong connection to music growing up. He even mentions his time with the “East Side Gang”, the group of friends he met while working at the East Side Mario’s restaurant chain, as being profoundly shaped by the music of DJ Dan and other dance music artists. While these memories clearly hold a deep spot in James’ heart, they do not always resonate with the audience the way he would hope. This is a shame considering the film spends the first twenty minutes establishing James’ personal history. The problem is that we do not get enough insight into the group outside of the fact that they had a great time partying. This is especially true when the film refers back to them later on in the film. There is no doubt that an interesting story could be told about James’ personal life, it just does not come across in this particular film.

While James’ personal journey may not be as gripping as we would like, he nails it in regards to capturing the passion that the DJs and club goers have for the music. Regardless of whether he is showcasing the dance culture in Toronto, Ibiza, or at the Burning Man festival, James captures the wide range of philosophies that people have as to why dance music has such a spellbinding grip on so many worldwide. Though The Global Groove Network has a few missteps, the film really excels when it lets the DJs and the music do the talking.