Belgian auteur Joachim Lafosse delivers another astounding look at family life with his gripping film, Our Children. Based on a real life incident that occurred in Belgium in 2007, Lafosse’s film explores the events that may have led up to the horrific event. To go into the specifics regarding the incident would be a disservice to the film, especially since Our Children keeps it real objectives a mystery for a good part of the film. All the viewer knows at the beginning of the film is that some sort of tragedy has occurred. A mother is lying in the hospital bed requesting that her children be buried in Morocco, the homeland of their father.

The film flashes back to several years earlier to show the mother, Murielle (Émilie Dequenne), in much happier times. Murielle, a school teacher, falls madly in love with Mounir (A Prohet’s Tahar Rahim), a Moroccan immigrant, and starts to plan their life together. She agrees to move in with Mournir and his surrogate father Dr. André Pinget (Niels Arestrup). The trio’s living arrangement continues even after Murielle and Mounir marry and begin to have children. At first Murielle is taken by Pinget’s wealth and generosity. However, she soon begins to feel trapped by the financial freedom Pinget provides.

Murielle grows increasingly wary of the influence that Pinget has over Mounir and the household in general. She even suggests to Mounir on several occasions that they find their own place to live away from Pinget. The problem, of course, is that Pinget is their main source of financial support. Murielle’s job teaching cannot sustain a husband and four children, and Mounir rarely holds down a job. Also, as their marriage becomes more strained and Mounir more distant, Murielle appreciates having Pinget around to help with the children. It is a double edge sword for Murielle that offer no signs of relief.

The overwhelming stifling power that Pinget has over the family begins to wear down Murielle both physically and emotionally. She soon spirals into a depression and finds her life without any signs of joy. Brief reprieves come in the form of a family trip to Morocco to visit Mounir’s mother and weekly visits to her psychiatrist (Nathalie Boutefeu). Unfortunately, both of those are fleeting moments as her therapy sessions are cut short when Murielle reveals that she is living with Pinget, who is also the family’s physician. Despite being warned by the therapist that her living arrangement is unhealthy on several levels, there is little that Murielle can do to change her circumstances. 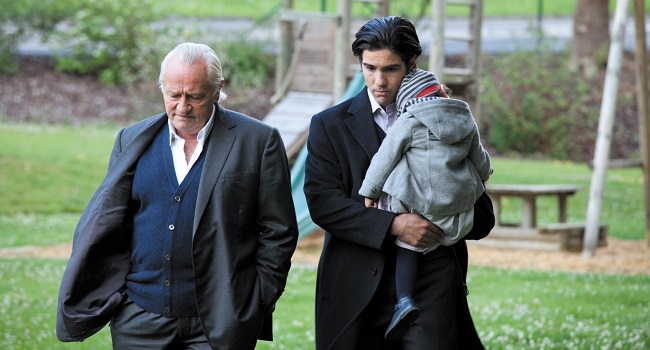 Lafosse’s film provides a chilling look at how money is the ultimate power. It is never clear why Pinget is so determined to keep Mounir and Murielle under his control besides the fact that he can. Outside of his role as a physician, Pinget has a reputation of helping Moroccans immigrate to Europe through marriages that are strictly constructed for achieving immigration papers. This seems to give Pinget a bit of a god complex as he sees himself as a saviour bringing the hopeless to the promise land. The film even makes a point to note that Pinget married Mounir’s sister, Fatima (Mounia Raoui), in order to bring both her and Mounir to Belgium. The curious thing is that Pinget left Mounir’s brother behind. In fact, it seems that acquiring Mournir was Pinget’s main objective. Niels Arestrup is fantastic as the as the manipulative Pinget, he manages to evoke a sense of fear within Mounir and Murielle while rarely breaking his cool demeanour.

As strong as Arestrup’s performance is, the real strength of Our Children is found in the riveting work of Émilie Dequenne. Winner of the Un Certain Regard Best Actress prize at the 2012 Cannes Film Festival, Dequenne is simply electrifying as Murielle. She expertly conveys a woman who is drowning under the weight of her surroundings. It is a heartbreaking performance that will stay with the viewer long after the film ends.

Our Children never tries to justify the horrific events that take place at the end of the film. Joachim Lafosse’s film merely wants to offer some insight on why the incident may have occurred. Lafosse’s skilled direction, coupled with the wonderful performances from the entire cast, helps to make Our Children a moving experience that you will not soon forget.

Our Children is screening on Saturday, April 13th at 9 pm at The Royal (608 College Street). Tickets can be purchased at the Cinéfranco website or at the theatre.