“The way I have to connect with him is go into his world, to dive into the ocean of the gym, of the fight club…” These are the words uttered by director Corey Lee as he explains to his mother how he plans to step into the martial arts ring that his father has made famous. At first his mother assumes it is a joke, but when Lee assure her he is serious, she simply responds “I think you’re nuts.” The truth is the audience is thinking the same thing. The idea of Lee, who now has a family of his own to take care of, stepping into the ring to train to be a fighter seems far-fetched. One cannot help but question how sincere Lee’s motives are at first. However this is far from a mere ploy, Lee’s quest is one that ultimately takes him, and the audience, on a surprisingly rewarding journey.

Legend of a Warrior is ultimately a tale about a son’s desire to reconnect with his father at all cost. Fearing that his children will grow up not knowing the Chinese side of their heritage, Corey Lee sets out to give his children an education on his family’s past. The problem is that Lee only knows the ”superhuman” side of his father, Frank Lee, that the public sees. Lee has no idea who the real Fraank is. At age 70, Frank is still treated like a rock star in most circles. Creator of the White Crane martial arts technique, Frank became a huge name in both Hong Kong and Canada. Now owning his own gym, Frank is the “Sifu”, which means teacher, for several of the world’s top martial arts champions. In order to try and understand what makes his father tick, Lee decides to let Frank train him so he will be able to compete on a professional level. However, neither Lee nor Frank anticipate how their relationship will forever be altered as a result.

One of the things that will strike you immediately about the film is the glorious use of animation. Lee uses the black and white animated segments to explore many of the key moments in Frank’s past. These sequences provide the documentary with a wonderful film within a film feel. The best thing about the way Lee uses the animation is that it never overpowers the film. He provides just enough to keep the pacing of the film upbeat, while never losing sight of the central father and son narrative. 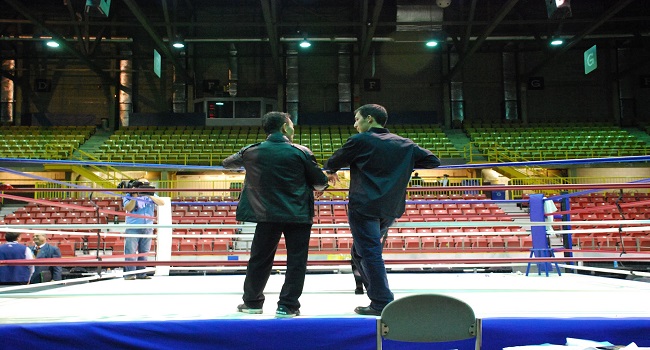 Corey Lee crafts a film that is both engaging and touching without ever feeling forced. By time the film is over the audience feels as if they have a better understanding of not only Lee and Frank’s relationship, but the men as individuals as well. Despite the estranged relationship that Lee has with Frank, he never paints his father as the villain. Frank is portrayed as man who never claimed to be more than what he is. This does not mean that Frank does not have his share of regret. One of the reasons that Legend of a Warrior is such a captivating film is because Lee not only successfully peels away the guarded layers of the wall that his father has spent years building up, but also reveals his own insecurities. Some of the most telling moments come when Lee is describing how envious he was of kickboxing champion Billy Chau, who was Frank’s star pupil.

Though Lee is nothing like his father, we start to see parallels to what Lee experienced through his own children. By being away from his own family for so long, the audience gets a glimpse of how the separation is affecting Lee’s own children. Legend of a Warrior is a marvelous film that not only shows the effects that decisions have on a family, but also the importance of a father/son relationship regardless of what age it begins. Legend of a Warrior is a crowd pleasure that should not be missed.