Depicting mental illness in film is a tricky affair at the best of times. A task, as evident in Craig Roberts’ Eternal Beauty, that is even more challenging when trying to balance drama with dark comedy.

After being stood up at the altar, Jane (Sally Hawkins) falls into depression and begins suffering from schizophrenia. Making matters worse is that neither Jane’s parents, abrasive mother Vivan (Penelope Wilton) and passive father Dennis (Robert Pugh), nor her selfish and constantly scheming sister Nicola (Billie Piper) show any interest in figuring out how to help her through it all. They respond to Jane’s mood shifts by simply questioning “have you been taking your pills?”

Her only familial ally is her other sister Alice (Alice Lowe), whose compassion can often come across as being overly protective of Jane. However, even Alice cannot help but be skeptical when Jane begins a relationship with Mike (David Thewlis), a fellow patient dealing with his own mental health issues. Though her time with Mike provides a source of light and hope, it also brings a new set of challenges that threaten to derail Jane’s quest for happiness. 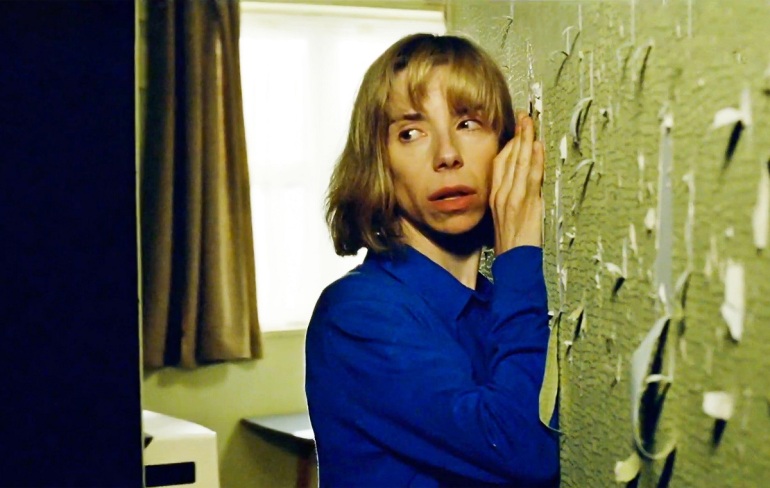 Of course, Jane’s notion of happiness and that of her family and doctor are at opposition with each other. As Jane herself even questions at one point, “what if there is no such thing as happiness, only moments of not being depressed?” Truth be told, it is questionable if anyone in Roberts’ film knows what being happy truly means. In her brief moments of calm, when her medication does not put her in a docile state, Jane seems to be the only one who can truly see her family members for who they really are.

Unfortunately, being diagnosed with paranoid schizophrenia, these moments of calm are often met with equal moments of volatility. It is when exploring the darker side of Jane’s condition that Roberts’ film really excels stylistically. Using the metaphor of the inside of a microwave, and having a wall rotate Jane around her apartment, Roberts finds intriguing ways to visualize the protagonist’s spiral into darkness. His colour palette not only brings the 1980’s to life, but his use of reds and blues also bring a rich texture to the sad and haunting plights that both the older and younger (played by Morfydd Clark) versions of Jane experience. Furthermore, the film’s brilliant sound design, which makes the wind sweeping in from the window and the voices Jane hears in the walls equally unnerving, accentuates the mesmerizing performance that Hawkins delivers.

As stunning and delicate a turn Hawkins gives, one that humanizes the characters even in her darkest moments, the film’s shift in tones never quite gel as well as they should. Part of this is due to the thinly written supporting characters. So much emphasis is placed on Jane’s interactions with her family, but one never gets past the surface level of their bonds. As a result, some of the dramatic moments feel stunted. This also impacts the film’s dark humour which, while amusing at times, never feels as compelling as the moments when Jane is wrestling with her condition in solitude. While Roberts constructs a film that overflows with style and creativity, the uneven tone keeps Eternal Beauty from reaching the ambitious heights it aims for.