Many women will nod their head knowingly when observing Femke Boot’s (Katja Herbers) experiences with social media in Ivo van Aart’s The Columnist. A successful columnist and author, Boot has become the target of relentless online attacks. Her recent article about the controversial holiday figure “Black Pete”, the companion of Saint Nicolas who is usually portrayed in blackface and Renaissance regalia, has particularly struck a nerve with the sea of males who troll her daily. Boot knows that she should not be reading the comments, but they are tough to ignore when her looks are insulted, and her personal safety is threatened.

As thousands of comments flood her various social media platforms, Boot finds herself becoming obsessed with each new remark that is posted. When the local police show no interest in addressing the threats, dismissing them as nothing more than schoolyard bullying, Boot opts to conduct her own investigation. To her surprise, one of the online trolls turns out to be her next-door neighbour. Filled with rage, she decides to teach this two-faced individual a deadly lesson about respect.

Finding the murder oddly therapeutic for her writer’s block, Boot begins making great strides on her latest novel while waging a one-woman war against her haters. Collecting a trophy from each of her victims, appropriately their middle finger, Boot’s finds herself hiding her double life from her daughter Anna (Claire Porro) and her author boyfriend Steven Dood (Bram van der Kelen). 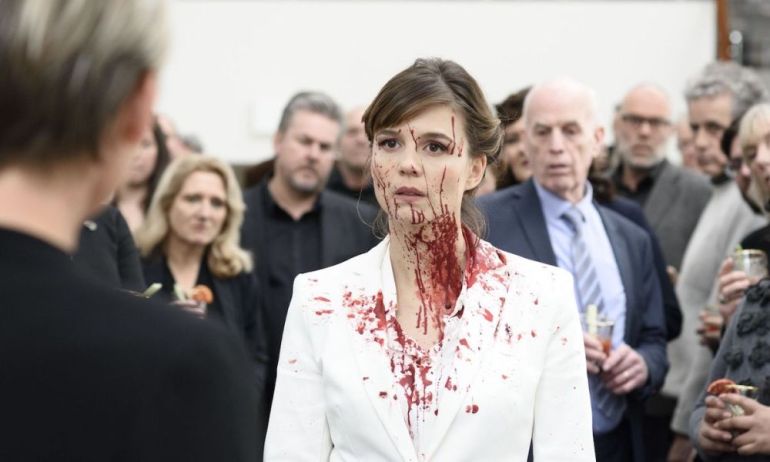 Playing like a modern day Serial Mom, The Columnist is a deeply satisfying horror satire. In many ways the film is the type of socially aware horror film that The Hunt desperately wanted to be. Ivo van Aart is cheekily aware of the ideological contradiction that Boot finds herself in. On one hand she supports her daughter’s defiant campaign at school to raise awareness about the lack of free speech in many countries. However, she is also tired of the way men abuse their free speech privilege on social media.

As satisfying as it is seeing Boot seek revenge, Herbers is a pure delight in the lead role, one is constantly aware that she is devolving into the same monster she is fighting against. The more she feeds her lust for revenge, the further her humanity recedes into the darkness. This is not to say that the film lets her victims off the hook for their actions. While many of them think it is harmless fun to troll others online; and find fellowship in the hive mind culture of social media, the film highlights the real-life impact that these attacks have on the recipients.

Although the film takes some big leaps in logic when it comes to how Boot manages to target her victims, sometimes in broad daylight without a single person noticing, there is plenty to enjoy here. The Columnist is a sharp horror satire that satisfies on multiple levels.