In the small town of Orridge, located in the American Rust Belt, the closing of the New Liberty Plastic factory delivers a devasting blow to the local community. No one in Robert Jury’s Working Man feels the pain of the closure more than dedicated worker Allery Parkes (Peter Gerety). Refusing to retire when given the chance, Parkes made the factory an integral part of his daily routine. The work gave him purpose and solitude.

Filled with unquenchable restlessness, Parkes soon finds himself getting dressed in his work uniform and visiting his old place of employment. While his actions are viewed as a pointless endeavour by his fellow unemployed former co-workers, things take a turn for Parkes when he finds a way into the locked factory. Spending hours cleaning the vacant facility, his lengthy disappearances begin to spark the curiosity of his wife Iola (Talia Shire) and their neighbours.

While some question if Parkes is losing his mind, former colleague Walter Brewer (Billy Brown) sees something different. He understands the need to work so that one has a sense of self worth. Secretly holding a backup set of keys to the factory, Brewer helps Parkes to temporarily restore power to the building so that they can continue going through the motions of their former roles. Of course, it is only a matter of time before others get wind of what is going on and want in as well. Before he knows it, the quiet Parkes finds himself being unlikely face of a movement to save the factory. 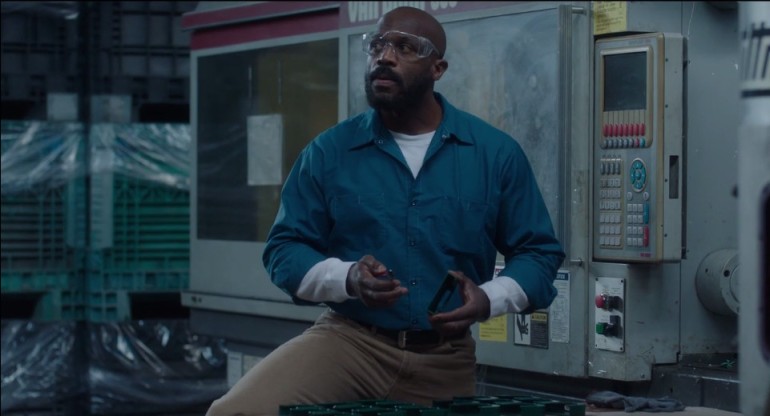 Working Man may use the reverberating effects of the outsourcing manufacturing on American towns as a springboard, but the waters it dives into are far more personal. Though two vastly different individuals, Parkes and Brewer are men desperately trying to fill a void. The factory is more than a source of work, it provides a barrier from longstanding traumas that neither man wants to deal with.

Getting to the core of each of their personal demons takes a while though. Jury’s film is a slow burn drama that earns each emotional beat. Much of this is due to the strong work by Peter Gerety and Billy Brown. This story could have easily devolved into magical negro tropes territory, especially since Brewer goes out of his way to help Parkes at every turn. Parkes is so blinded by his own issues and privilege that he doesn’t even bother to ask the man his name at first, despite spending the whole day together, or take any real notice of Brewer outside of what he can do for him. However, Gerety and Brown’s layered performances allows the film to evolve into something more nuanced. Parkes and Brewer’s friendship becomes one of equals rather than one of service.

Spending a lot of time on the evolution of Parkes and Brewer’s friendship, Working Man effectively weaves in themes of grief and mental illness into the narrative. Unfortunately, as a result, the film’s commentary the shifting nature of the American manufacturing landscape does not hit as hard as it could have. Jury could have also delved into the tension and neglect in the Parkes’ marriage much further. Despite these quibbles there is plenty of emotionally ripe fruit to pluck here. Working Man captures the necessity of work in life, while simultaneously reminding us that it can never replace the joys and pains that make life worth living.