Small Town Hero is a dark comedy that, much like its protagonist Pep (Simon Cassidy), walks a very fine line. Framing its narrative within the confines of a mockumentary, Darren Bolton’s film wants audiences to both laugh at and fear its hero’s delusions of grandeur.

After protecting a local shop from some hoodlums, Pep becomes a bit of a hero in the community. Believing it is his calling to be the embodiment of justice and decency, he takes it upon himself to weed out crime in all forms from a petty thief to a litterer on the street. Bringing his brand of vigilantism to the neighbourhood watch program, Pep quickly begins to wear out his welcome amongst the group. His reluctance to obey orders and blatant jealously when a fellow member, Adrian (Joe Evans), gets media attention for foiling a robbery leads to tension within the team.

Pep’s antics also start to annoy his pregnant ex-girlfriend and mother of his son Becky (Millie Reeves), who wants nothing more than to move on with her life in peace, and the community at large. The latter is especially true for new resident Patrick (Johnny Vivash) who becomes the target of harassment when Pep believes he is the mystery pedophile who is rumoured to have moved into the area. 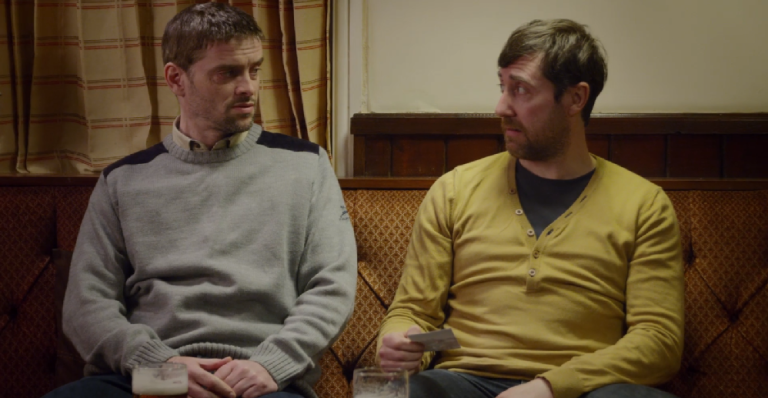 While dark comedies are tricky to pull off on the best of days, Bolton manages to get much mileage out of its off-beat premise. Much of the edgy humour works because of the strong performances in the film. The most notable of which is Cassidy’s turn as Pep. It takes a lot to get the audience to follow a character who is a jerk for the bulk of the film. However, Cassidy’s comedic timing and overall range allows the various layers of the character to shine through.

Despite Cassidy’s fine work, the film struggles in the latter half. By focusing on Pep’s obsession with finding the pedophile, without any actual proof he exists, Small Town Hero inadvertently backs itself into a corner. The film never seems comfortable fully wading in the disturbing mud that Pep lives in. This is evident by the way Bolton’s film tries hard to paint Pep as, deep down, a sensitive if misguided father.

These moments never quite sit well with everything that came before it. Thankfully, there is so much to enjoy in Small Town Hero that the missteps in the final act can be forgiven. Bolton’s darkly amusing film is a reminder that the need to feel important and special can be a dangerous illness itself.