Adelaide Wilson’s (Lupita Nyong’o) face is flushed with terror as she is pinned head first to a glass tabletop. The symmetrical way Adelaide and her reflection look ahead with wide-eyed fear is eerie. The sequence becomes truly frightening when the reflection of Adelaide’s red jumpsuit wearing doppelgänger, aptly name Red, appears in the glass as well. In capturing the three faces in one simple shot Jordan Peele’s Us chillingly conveys that the person we see in the mirror is rarely the person lurking deep inside.

As is showing in the opening moments, this is not the first time Adelaide has encountered Red. When she was a little girl Adelaide wandered away from her constantly bickering parents while visiting a beach side amusement park in Santa Cruz. Getting lost in a house of mirrors, she stumbled across another girl who looks identical to her. The experience was so traumatizing that she never spoke a word of it to anyone.

Now grown and headed back to Santa Cruz for a family vacation with her husband Gabe (Winston Duke) and their children Zora (Shahadi Wright Joseph) and Jason (Evan Alex), Adelaide’s anxiety is at a fever pitch. Unable to shake the feeling that something is coming for her, these inklings are confirmed one night when Red, and three other beings who look identical to Adelaide’s family, appear on the driveway of the Wilson’s beach home.

Claiming to be tethered to Adelaide and her family, and thus enduring the painful flipside to Adelaide’s joyous experiences, Red and the rest of the “shadows” are determined to get rid of their prosperous others and finally have their moment in the sun. 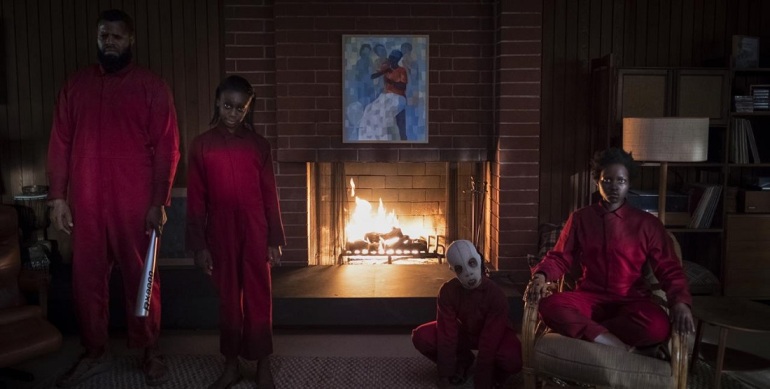 As with his previous work, Peele is not so much concerned with racking up the body count, though it is up significantly in this film, but rather exploring the sinister side of what defines us as humans. Raising intriguing questions about the relationship between science, spirituality, and the soul, Us offers a plenty of food for thought while never sacrificing its horror beats.

Gleefully contemplating the dual nature of our existence, Peele shows that one’s stairway to heaven, or in this case an escalator, is another’s to hell. While doppelgängers have long been a staple in genre films, what makes Us so creepy and thrilling is the performances. Lupita Nyong’o is sensational in the dual roles of Adelaide and Red; she breathes full life into each character and can raise the hairs on the back of one’s neck with a simple look. It is in Nyong’o’s movements, ever so subtle at times, where Peele finds plenty of room to shape key aspects of the film’s narrative.

Peele uses movement as something that is equally freeing and terrifying. This is wonderfully visualized in sequence where the art of dance is viewed as both empowering and potentially deadly. It is fascinating to observe how the shadows, often uncontrollably at times, embody their duplicates characteristics even if they do not fully understand them. The film finds much humour in what our mannerisms reveal about ourselves and our relationship with others.

Speaking of the comedic beats, which there is plenty of, including a great jab at smart home devices, Us does a solid job balancing levity and tension. A perfect example of this is the sequence at the home of family friends Kitty (Elisabeth Moss in a delightful supporting turn) and Josh Tyler (Tim Heidecker), who would rather spend time with their alcoholic beverages than each other. While the film’s plot is not as quite as strong as Get Out, the explanation of how the “shadows” came to be is a tad clunky, there is much to enjoy here.

A chilling and thought-provoking horror, Us gives plenty of reasons to be afraid of our own shadow.