In the age of technology at our finger tips, it has become increasingly tougher to decipher truth form fiction. What our eyes may have witnessed is not always what really occurred. Such is the dilemma that drives much of 3 Faces, the latest film from Iranian filmmaker Jafar Panahi.

The film opens with a disturbing cell phone video of teenager, Marziyeh (Marziyeh Rezaei), commenting about her attempts to reach out to famed actress Behnaz Jafari (who plays a fictionalized version of herself in the film) to no avail. Marziyeh claims that she dreamed about pursuing an acting career, but her family and her fiancé’s family wanted her to follow the path of a traditional wife. The video ends with what appears to be the teen committing suicide.

Is the video a hoax? If real, who found the footage? These are just a few of the questions racing through Jafari’s mind as she and friend Jafar Panahi (playing himself) embark on a road trip to Marziyeh’s village in hopes of finding answers. While Jafari has doubts to the authenticity of the footage, Panahi questions how a teen from a remote village could pull off such a feat with no formal training. Their search for the truth only gets further complicated when they encounter villagers who not only know the teen, but seem unmoved by her disappearance. 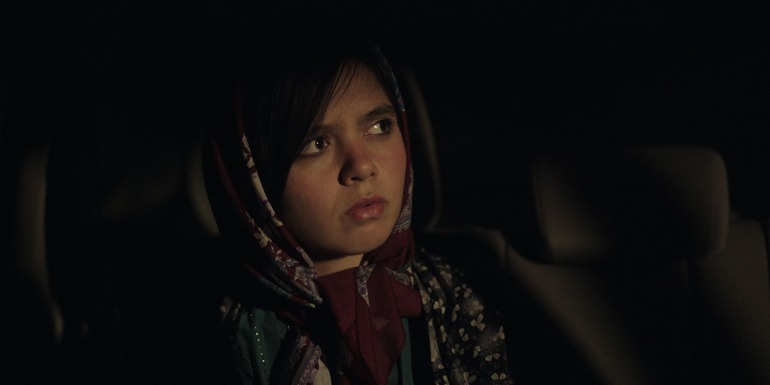 It is through the interaction with the villagers and Marziyeh’s volatile family that 3 Faces is most intriguing. While the mystery of the video is our entry point into this world, the sense of urgency is never fully capitalized on. Instead Panahi uses the conversations within the film to explore tradition and the way gender and violence are linked in patriarchal societies.

He effortlessly juxtaposes Marziyeh’s modern views with the sense of tradition that consume most of the villagers. Similar to Panahi’s situation in real life, where he has been banned by the Iranian government from making films, a ban he continues to defy as is evident in this film, Marziyeh finds her artistic voice being stifled by powers beyond her control. Her situation is especially harrowing given the threat of violence that her family members freely throw around.

Though many of the themes in 3 Faces are heavy on the surface, the execution is surprisingly light. The conversations in Panahi’s script moves back and forth from comical to tense with a measured ease. Of course, the downside to this is that it causes the film to occasionally meander. A trait that becomes noticeable when the central mystery begins to fall apart.

Fortunately, 3 Faces remains an engaging work even in its weaker moments. Whether it is the way the camera follows Jafari’s, who is clearly shaken by the video, movements around Panahi’s car, or the way the film lovingly finds humour in the mundane moments, such as the honking systems used to verify if a single-lane road is clear to travel, there is much to enjoy in the film. 3 Faces may not crackle with the sense of urgency that its premise would suggest, but it is in the digging for answers that allows greater questions to blossom.