Cinematic tales involving terminally ill children can often carry a sentimentality that feels forced. Thankfully Likarion Wainaina’s debut feature film Supa Modo is not interested in manipulating viewers by playing with their heartstrings. The film is far more concerned with the beauty of life than it is the dread of death.

Jo (Stycie Waweru) a nine-year-old who loves watching Jackie Chan films and fantasizes about being a superhero. Her illness may have her in the children’s ward at the hospital, but it has not stop her from amassing a good group of friends. When her family gets word from the doctor that she only has short time to live, Jo’s mother, Kathryn (Maryann Nungo), decides that the best thing for her daughter is to spend her remaining days at home. A decision that does not sit well Jo’s older sister Mwix (Nyawara Ndambia) who feels that the medical staff and Jo’s friends are best suited to make her final days as pleasurable as possible.

Observing the ways her mother’s strict “stay home and rest” policy has left Jo isolated from the village and nature, Mwix devises a plan to make Jo’s dreams a reality. Getting members of the community to play along, Mwix sets up a series of events to convince Jo that she indeed has superpowers. 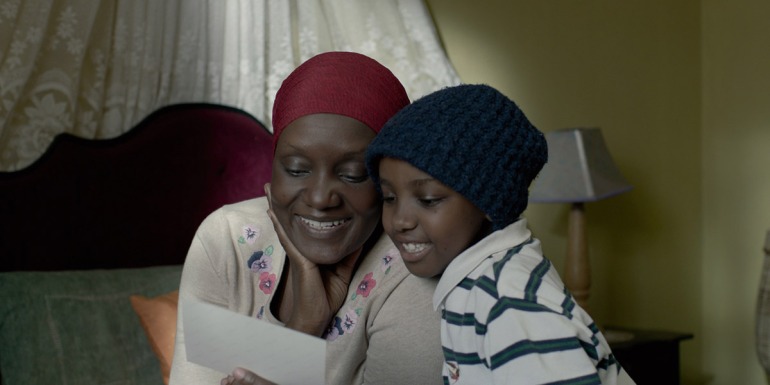 Enchanting and inspiring, Supa Modo does not wallow in sadness, it encourages us to find the strength to overcome it. Wainaina constructs a richly crafted observation of the way grief can inadvertently lead to mourning the living when we should be celebrating them. While Jo’s declining health is our entry point, the film uses it to explore the distinct ways illness impacts our perspectives on life. Kathryn begins treating Jo like a Fabergé egg cracked beyond repair. Instead of admiring the beauty it still holds, she attempts to put it away on a shelf until it is ready to fall apart.

In juxtaposing the different approaches Kathryn and Mwix’s take towards Jo’s condition, the film successfully shows how even the smallest of gestures can have a positive ripple effect within the community. Jo’s obsession with movies also provides Wainaina the chance to emphasize the power of both cinema and childhood imagination without ever feeling self-congratulatory.

One of the film’s greatest strengths is that it earns every emotional moment. Whether it is Kathryn attempting to keep the pain of sadness bottled up, or the way the villagers rally around Jo’s dream, the film’s heart always shines through. A delightful debut, Supa Modo is a celebration of life, friendship and the family bonds that can never be broken.

Supa Modo is screening as part of the Goethe Films: One Fine Day – Africa Now retrospective.