Hirokazu Kore-eda’s latest film Shoplifters is as deceptive as the family at the centre of it. When we first meet members of the Shibata clan, middle-aged patriarch Osamu (Lily Franky) is providing visual cover for Shota (Kairi Jyo) so that the youngster can steal items from a grocery store. In observing the precision in their movement and the unspoken communication it is clear that this is not the first time they have shoplifted and most likely won’t be their last.

Frankly the entire family – including Osamu’s wife Nobuyo (Sakura Andô), his sister-in-law Aki (Mayu Matsuoka) and his grandmother (Kilin Kiki) – all seem to have dubious ways of providing for their family. Just as the audience is ready to pass moral judgment on the clan, Kore-eda throws a new wrinkle into the dynamic. This comes in the form of Yuri (Miyu Sasaki), a four-year-old who Osamu and Shota notice out in the cold one night. Taking her back to their place with the intent of providing warmth and food, despite little of the latter to go around, plans to return the young girl to her home are halted when the family discover signs of abuse.

Bringing the young girl into the fold, and changing her name to Juri, the Shibatas begin teaching her the tricks of the trade and grow tighter as a unit in the process. However, when reports begin to surface about the missing girl, and the police close in, secrets that threaten to rip the family apart start to unravel. 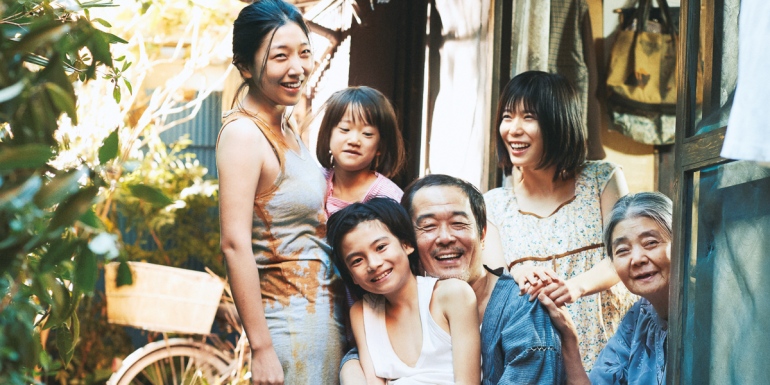 Winner of this year Palme d’Or award at Cannes, Shoplifters is a delicate drama that pulls the viewer in slowly. We become so familiar with the rhythms of the family that by time major secrets are revealed, we cannot help but root from them flaws and all. This allows Kore-eda to gracefully question the notion of family and shows that one does not need blood ties to make meaningful bonds.

Kore-eda also does a wonderful job of depicting the new state of poverty that is impacting various parts of the world. The Shibatas steal not for fun but necessity. They are the working poor, individuals who endure long hours in hot dry-cleaning factories, on dangerous construction sites, and even in seedy sex parlours; however, can barely make enough to cover rent. They may be swindlers, but they show far more morality and heart than those who make up the upper and middle class of society.

Featuring richly crafted characters and full of earnest emotions, Shoplifters is a masterful film that will have you rethinking the definition of family.