It is common knowledge that Tom Cruise broke his ankle while shooting a scene where he jumps from roof top to roof top during a foot chase. The consummate professional, and filled with astounding mental fortitude, Cruise manage to finish the scene as planned despite the injury. The broken ankle would have been the main story of the production for any other film, but Tom Cruise is no ordinary actor and Mission: Impossible – Fallout is no ordinary film.

As one observes in the special features of the film’s Blu-ray, the broken ankle was the least of everyone’s concerns. Tom Cruise was literally one wrong move away from serious harm in every single one of the stunts he performed in the film. Making the sense of danger in the final product even more captivating.

In this installment Ethan Hunt (Tom Cruise) and his IMF team (Simon Pegg and Ving Rhames) find themselves battling the remnants of Solomon Lane’s (Sean Harris) Syndicate, now called the Apostles, as they search for three stolen plutonium cores. The cores are of particular interest to a mysterious individual known as John Lark who intends to use the plutonium to finish the work Lane started. Not trusting that Hunt’s team can complete their mission, the CIA sends one of their top agents, August Walker (Henry Cavill), to ensure that the items are retrieved by any means necessary.

Complicating matters further is the fact Hunt needs Lane to find Lark and the plutonium, while former ally Isa Faust (Rebecca Ferguson) is tasked with ensuring that Lane is silenced once and for all. 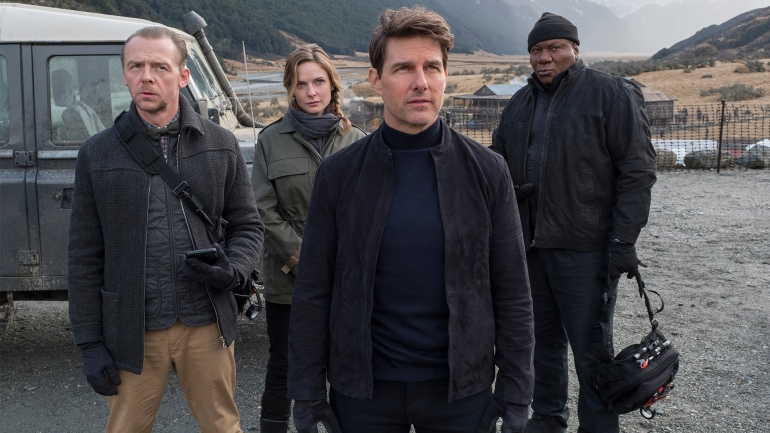 One of the year’s best films, Mission: Impossible – Fallout is one of those rare sequels that surpasses the films that came before it in the series. It is an edge of your seat thrill ride that manages to top itself with each action sequence without sacrificing the story in the process.

Christopher McQuarrie’s direction feels especially assured this time around. Unlike most modern action filmmakers, McQuarrie places the practical stunts at the forefront, and uses special effects to enhance them rather than the other way around. This allows Cruise and the rest of the cast, Henry Cavill is a great addition as the rough around the edges Walker, to raise the stakes in a palpable way.

The Blu-ray, which arrives in stores tomorrow as part of a Blu-ray/DVD/Digital combo pack, courtesy of Paramount Home Media Entertainment, is packed with special features that are just as riveting as the film itself. The standout is “Behind the Fallout” which consists of seven featurettes that breakdown how every action sequence was filmed. Take for example “Top of the World” that highlights just how grueling and dangerous it was to create and shoot the Halo jump; or “Rendezvous in Paris” in which the cast and crew discuss how Paris became a key component of several action sequences including the Arc de Triomphe motorcycle chase.

An endlessly thrilling film from beginning to end, Mission: Impossible – Fallout is a must have for any cinephile’s Blu-ray collection.