Lisa Spinelli (Maggie Gyllenhaal) is a kindergarten teacher gone rogue. Once a consummate professional, she shifts gears when her five-year-old student, Jimmy Roy (Parker Sevak), reveals that he’s a gifted poet. As the film unravels, she becomes enamoured with him in a way that’s unhealthy, making a series of cringe-worthy moves that almost have her rivaling the infamous Mary Kay Letourneau for the title of “Worst Teacher Ever”.

Directed by Sarah Colangelo, The Kindergarten Teacher is the English-language remake of the Israeli film of the same name. The sophomore feature film from the writer-director premiered at this year’s Sundance Film Festival with Maggie Gyllenhaal receiving an onslaught of high praises for her portrayal of a student-obsessed teacher.

At first, Lisa seems like a dedicated, unassuming heroine. She loves her students, her husband (Michael Chernus), and her children (Daisy Tahan and Sam Jules) – although she seems disenchanted with the latter. In her spare time, she attends poetry classes, but she just can’t seem to make an impression on her instructor (Gael García Bernal) and she’s one bad poem away from not qualifying for the next semester. And then Jimmy, the quietest kid in her kindergarten class, starts reciting original poems at random. 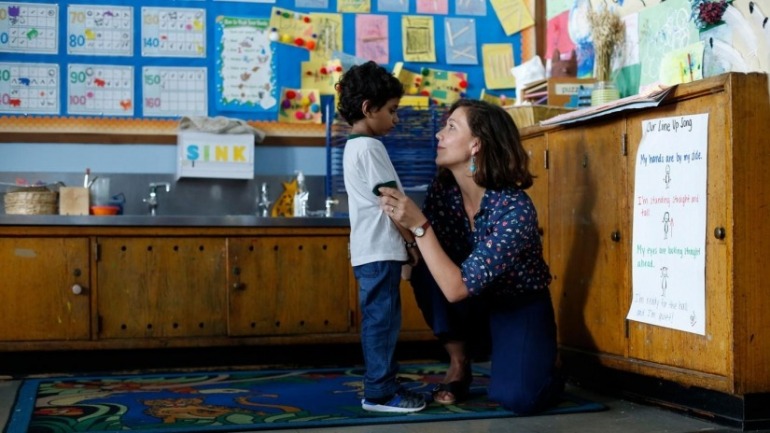 This is where the slow-moving film picks up, as the story veers off in an unusual direction.

Blown away by his depth and use of language at such a young age, Lisa beings to write down Jimmy’s poems. She even enlists his young and lackadaisical babysitter Becca (Rosa Salazar), asking her to write down any poems he comes up with at home. With the kid’s poetic works in hand, Lisa does the unthinkable. She takes his poems and recites them as her own at poetry class, finally winning the attention of her instructor who she has a brief tryst with in his office.

When Lisa starts crossing student-teacher boundaries, it becomes clear that her obsession with Jimmy is less about his gift and more about her own insecurities and shortcomings. She starts interrupting his nap time to lock him in the bathroom to recite poems, she gives him her personal phone number so that he can call her after hours with his ideas, and she takes him to a poetry slam without his father’s permission. She does all of this because she doesn’t want the world to put him on a shelf and forget about him – in the same way she has been forgotten.

The Kindergarten Teacher tells the tale of a woman who loses sight of the limitations of her job in her feeble attempt to revive her personal life. Lisa’s descent into disgrace is upsetting and somewhat anti-climactic, but completely of her own volition. Though her heart might have been in the right place initially, in trying to save Jimmy and herself from the harsh realities of life, she wound up on the losing end.

View all posts by Mischa Jackson