William Wallace is not physically in Outlaw King, he is referenced in name only, but his presence hangs over the film like a cloud just out of reach. Though David Mackenzie’s latest film tells the story of 14th Century Scottish hero, Robert the Bruce (Chris Pine), it is hard not to think of Braveheart when observing the bloody battle scenes.

This is not to saw that Outlaw King does not forge its own path. The film focuses on several key years in Robert’s life and picks up just as he has made the decision under duress to submit to the English rule of Edward I (Stephen Dillane). Attempting to adapt to life within the ruthless regime of King Edward and the Prince of Wales (Billy Howle), as well as getting to know his new wife Elizabeth de Burgh (Florence Pugh), Robert finds it hard to sit back and watch his people suffering.

A good portion of the film involves following Robert amassing an army, which includes the loyal James Douglas (Aaron Taylor-Johnson giving an over-the-top performance), to combat the English and earning the moniker the “Outlaw King” in the process. As Robert and his men engage in a strategic cat and mouse game with English soldiers, in a build up to the epic bloody showdown, the cracks in Mackenzie’s construction becomes apparent. 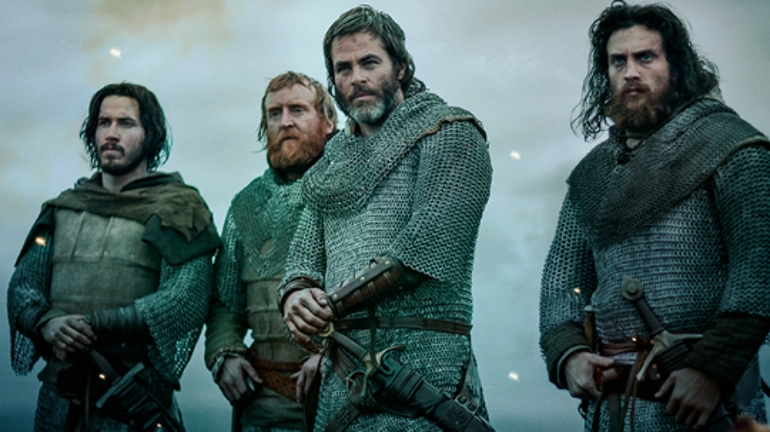 As enjoyable as it is to see a muddied Robert lead his men into gory battle, one never feels connected to the conflict. Whether it is the bodies flying off horses, individuals meeting a gruesome death or Robert losing close friends, none of this carries any emotional weight.

MacKenzie rarely takes time to develop his characters beyond typical genre architypes. A perfect example of this is Elizabeth de Burgh. Pugh gives a great performance despite the character being given very little to do. Elizabeth is simply there to see the strength within Robert before he realizes it himself.

While exciting from a technical standpoint, Netflix spared no expense when it comes to the action, Outlaw King is the type of epic that entertains despite not quite being fit for a king.