The most celebrated Female French author in history, and an icon to generations of women, the life of Sidonie-Gabrielle Colette was as salacious as the novels she became famous for writing. In Wash Westmoreland’s Colette, we are provided with a glimpse into how a young teenager from the country eventually challenged societal norms on sexuality and gender.

The story commences when Colette (Keira Knightley) marries the much older Willy (Dominic West), a Parisian publisher with a weakness for gambling and women. Unimpressed by the shallowness of high society, the young writer begins to find her own voice when she agrees to be one Willy’s “factory” authors, writers whose works were published under Willy’s own name. To the couples’ surprise, Colette’s novel about a fictional woman named Claudine becomes the toast of the town. Breaking sales records, especially among young women, the book’s success reignites Willy’s standing in the literary world. 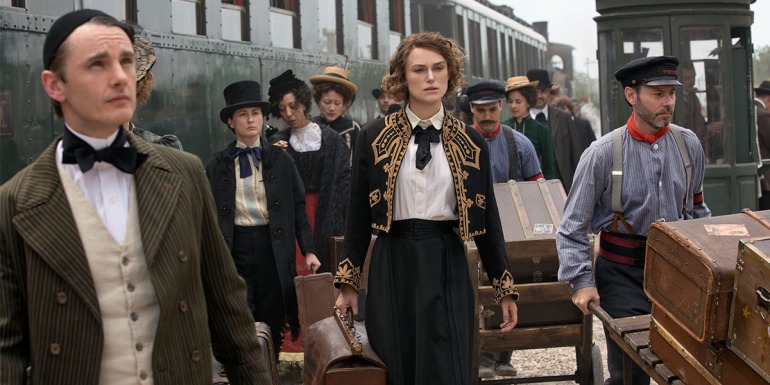 As the couple enjoy the financial fruits of the subsequent novels in the Claudine series, and Colette begins to become more comfortable with her own sexuality, problems in their relationship become harder to ignore. One of many issues being that the novels are based on Colette’s words and experiences, but Willy is getting all the credit.

Colette is livelier than most period dramas of this nature. A lot of this is due to the strong work by Knightly and West in the film. Through their undeniable chemistry the film is effective in its commentary on the gender-based hypocrisy of the era and the fragility of the male ego.

Considering the role that sexuality played in Colette’s life the film never quite feels as daring as the woman it is honoring. Thankfully though there is still plenty in the film to enjoy. Whether Westmoreland is documenting Colette and Willy’s extra marital dalliances or touching on the impact of the Claudine novels on the LGBT community, Colette is an engaging examination of a woman who refused to let anyone control her narrative.