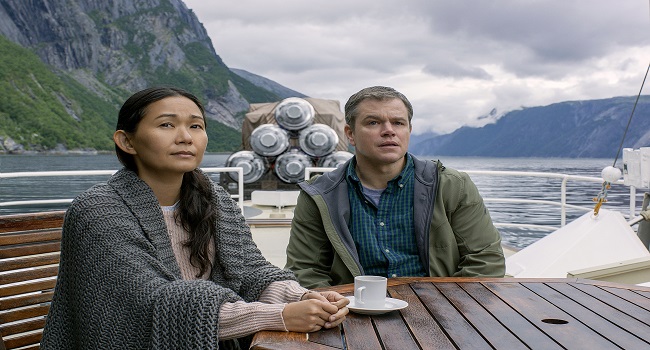 Everyone’s favourite man of the moment stars in yet another decidedly average film. The concept was interesting, but the execution was… well, tedious. Downsizing is described as a social satire, where people can decide to shrink to five inches of height to sort out their finances. I’m still unsure; is there meaning buried under the concept? Am I either too smart or too dumb to fully grasp it?

Smaller people have less money problems. Okay…what else is this film saying? What exactly is it satirizing? The issues of global warming, and the fear of a population that the planet cannot maintain, are themes that are barely given a chance to breathe.

Apart from this fact that ‘small’ people can drastically increase their spending opportunities; the incredible thing about Downsizing is the lack of ideas it possesses.

Worse, the satirical element of the film fails to be funny at all. The few laughs arise from bizarre moments between the odd population of small people, mostly notably Christoph Waltz as a cryptic character who, while entertaining as the comic relief, doesn’t seem to have any meaningful place within the story.

The most powerful emotional moment comes, perhaps unsurprisingly, near the beginning when the film feels like it could be taking us somewhere interesting and different.

This moment is where Paul Safranek (Matt Damon) and his wife Audrey (Kristen Wiig) decide to take the plunge. Upon having all body hair removed, including his eyebrows, Paul wakes up as intended, a tiny man. He then receives an emotional phone call from his wife telling him she couldn’t leave her friends and family behind. This is really the only moment where one feels a genuine connection to any of the characters. Unfortunately, she is essentially cut from the film after this phone call, leaving Damon and Waltz all to ourselves.

Interest will wane as the film takes a more dramatic turn for the last act, erasing almost all laughs in favour of a heavy-handed approach on a concept that is bone dry by this point.

The characters we meet are all as thin as fishing line, not to mention Paul’s character isn’t exactly filled with depth either, and it is played with the flatness one has become accustomed to from Matt Damon. A perhaps promising concept is wasted here, and if you are after a satire, avoid this at all costs.