I watched a LOT of TV in 2017. My movie watching was down, but clearly TV stepped up in its place. Here are some thoughts on the series I enjoyed, and specific episodes worth seeking out if you haven’t watched these shows before.

Star Trek: Discovery S1 Ep 7 – Magic to Make the Sanest Man Go Mad (CBS All Access)
The new Star Trek series is definitely still finding its footing, but overall quite good, and this was the episode that convinced me to keep watching. Overall, the central story arc of the Federation battling Klingons is the weakest aspect (like all Star Trek series), and thankfully this episode begins to distinguish itself as a stand alone as you finally get a little more character development separate from how the overall story that affects them. Henry Mudd (Rainn Wilson as an EVIL Dwight) has a device that replays time, which gives him the opportunity to try and figure out how to destroy Discovery. We get to see how the only person to know that time is repeating, Paul (Anthony Rapp), convinces our heroine Michael (Sonequa Martin-Green) to help him.

The Crown S2 Ep 5 – Marionettes (Netflix)
The idea of the monarchy living out of the public eye seems like an impossible historic anachronism. Add to that an inherently shy Queen, and you get a 1960s monarchy that is as out of touch as it gets. When Queen Elizabeth II (Claire Foy) gives a speech, that she clearly hasn’t read before delivering it, at a car factory, we cringe with a knowingness that comes from decades of holding public figures accountable. The best thing to come from it is the opening of the monarchy – relating to the people. Watching actress Claire Foy go through the first televised royal Christmas address is priceless. 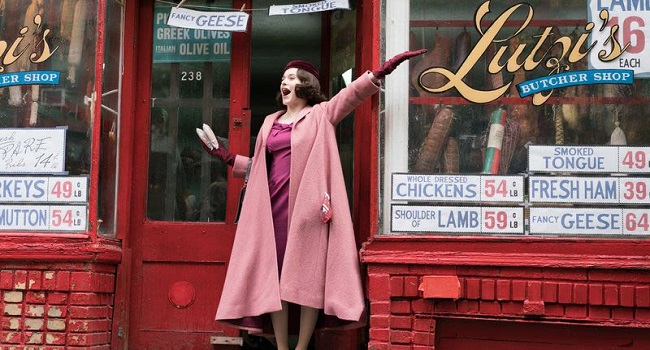 The Marvelous Mrs. Maisel S1 Ep 1 – Pilot (Amazon)
While the whole series is really, really good, the pilot gives us the best of all possible worlds – we see the creation of Mrs. Miriam ‘Midge’ Maisel (Rachel Brosnahan), from her courtship to wedding, followed by the lengths she’s happy to go to for her marriage to Joel (Michael Zegen) and even how it falls apart. Of course, the best is the drunken comedy scene near the end of the episode. The beginner’s luck aspect would make sense if she hadn’t been honing the craft FOR her undeserving husband for so long. We really get to know Midge, what makes her tick and exactly how pissed off she’s going to be.

This is Us S2 Ep 10 – Number Three (NBC)
This episode of This is Us is the culmination of the three views, by each sibling, of the same moments in time. In the past we observe when Kevin breaks his leg for the first time, redirecting him away from football and into acting, and in the present we see Kate dealing with her pregnancy, Kevin’s drug addiction and Randall’s situation with his foster daughter. This series has always balanced the competing storylines of the siblings with both their own past and their parents’ past, but the creativity of these three episodes (Number One, Number Two, Number Three) and the way that all of these connect here are why this show has become so successful.

The Good Place S2 Ep 1 – Everything is Great! (NBC)
This is the second episode on this list that benefits from messing with time. However, since this is the afterlife, it’s not exactly time, right. What this episode does is play with all the questions viewers might have had leftover from Season 1 – why frozen yogurt? Why Eleanor and Chidi? Who is in charge and how’d that happen? What is Janet? We get to see what was planned and what was random. For me, the best part of all the looping is the moment Eleanor (Kristin Bell) must examine whether she can trust herself (from a previous loop) or just go with her instincts. The hilarity of her curiosity about predestination vs the hell constructed for her is great. I never thought this show could survive its first season, but this proves it’s got staying power.

Game of Thrones S7 Ep 6 – Beyond the Wall (HBO)
All of Season 7 is worth watching, but this was the only episode I rewatched before the next episode aired. The humor steps up by looking at the relationships between each of the characters who have “friends” in common, but have never met before (the discussion of Brienne of Tarth is epic). Plus, we get to see the dragons and the white walkers in action. The tension over who will survive is heightened as the series gets closer to its conclusion. Arguing over whether Gendry could run all the way back to the Wall in time or how fast the dragons could arrive will likely NEVER be settled.

The Handmaid’s Tale S1 Ep 5 – Faithful (Hulu)
It’s difficult to find a favorite in the season as it feels like normalizing the idea that women should be subjugated in this way. However, the badass nature of this episode as Ofglen (Alexis Bledel) returns to society (and leaves dramatically,) and the secret deal created between Serena (Yvonne Strahovski) and Offred (Elizabeth Moss), shows the nature of women being stronger than the society that oppresses them. It offers a glimmer of hope. As Offred reclaims herself through this deal, we can see the seeds of a second season being sown even if the book itself ends. 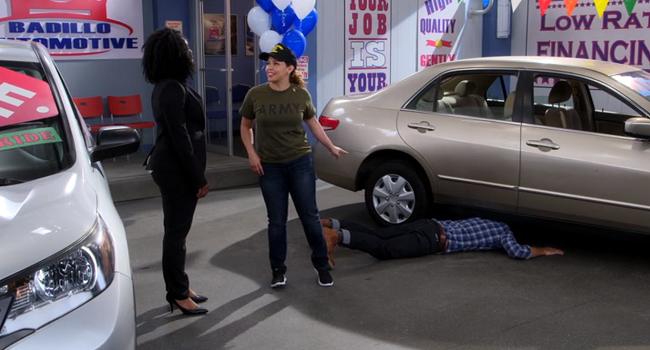 One Day at a Time S1 Ep 6 – The Death of Mrs. Resnick (Netflix)
There are a lot of new series on this list, and often there’s a moment when the series turns from a curiosity to something you must binge, stick with and defend. Mrs. Resnick is the family’s car – something that Penelope (Justina Machado) has had through most of her adult life. It has memories and connections to her own strength. When she goes to get it fixed, we see so much deeper into her past as a soldier as she connects with the mechanic, also a female veteran. Watching her be vulnerable as she lets go of something that has been reliable and stable, while her life has changed, is much more moving than the death of a car should be.

Godless S1 Ep 7 – Homecoming (Netflix)
If you’re hoping this series is a western with all women, you’ll be disappointed. There are probably 25 more women, almost all of whom wear all their clothes, and most have actual names and speaking parts than the average western. But the main characters are still 2 men (Jeff Bridges and Jack O’Connell, both good). The show DOES deliver with the season finale (and since it’s a limited series, it might just be the show finale) with a great big shoot out. And most of the people shooting guns are in fact women. And they’re defending themselves. There’s a lot about this show to like, Merritt Weaver as the town’s mayor and resident badass is my favorite. The show is less than it could be, but the finale is more than it deserves.

Honorable mentions:
1. The final season of Bones (yes, I watched all 12 seasons of Bones)
2. Scandal and Grey’s Anatomy are still strong – if dysfunctional
3. The final season of Major Crimes so far – yes, I cried and cried.
4. Jane the Virgin has had a good season after Jane had to recover from a horrible loss and learn to date again.
5. Stranger Things Season 2 – not as strong as the first season, but the last 2 episodes make up for a LOT.
6. The Mindy Project – Anna & Jeremy’s Meryl Streep Costume party (S6 Ep5) is worth every second of getting to that point.
7. The Crisis on Earth-X 4 cross over episodes of the CW Superhero shows (Supergirl, The Flash, Arrow and Legends of Tomorrow) was possibly the best version of crossover ever done. I only actively watch The Flash, but followed all I needed for this epic battle.
8. Big Little Lies was really great – but I’m pretty sure I don’t need a second season. Mystery solved.
9. Silicon Valley is still better than VEEP – sorry, but it is.
10. Casual is a series on Hulu you’ve likely never heard of. It has only it’s 4th season left, but if you like screwed up family drama, this the show you’ve been missing.

View all posts by Jess Rogers