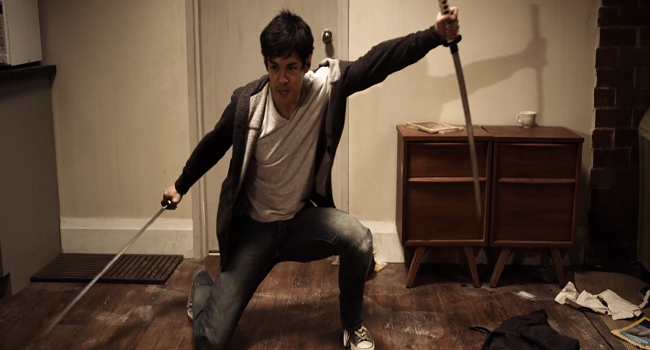 James Mark’s Kill Order plays like a throwback to the type of action films that were prevalent in the 90’s. The foot to face martial arts films that helped to make individuals such as Billy Blanks, Cynthia Rothrock and Jalal Merhi international stars. If there is any justice, then Chris Mark will follow suit. An established stunt performer in the industry, Chris Mark is clearly ready to move on to leading man status.

In many ways Kill Order feels like the ultimate audition reel for Chris Mark’s phenomenal abilities. He brings an intense energy to many of the fight scene which forms the foundation of the film.

While Chris Mark’s talents are undeniable, the film itself never maximizes his full potential as an actor. Part of the problem is that James Mark’s script pigeonholes the young actor’s performance into two groups: bewilderment and robotic. Neither of which allow Chris to convey much non-fighting charisma, though glimpses are there.

The plot of the film is far more complicated than it needs to be, but the gist of it is not anything that you haven’t seen before. David Lee (Chris Mark) is a student living with his uncle (Daniel Park) who is haunted by visions of a faceless being ordering him to “kill.” Unsure of what these visions mean, David soon discovers that he has advance fighting abilities when armed gunmen infiltrate his high school. On the run, and with only his friend May (Jessica Clement) to trust, David must try and put the pieces together before it is too late.

There is also an stuff involving shady corporations, double crosses and talk of things that go beyond traditional science. Of course, none of this will matter for those who just want to see cool fight sequences. The problem is, regardless of how satisfying it is to see a table used to knock someone out of a window, the film stumbles greatly when the action breaks to convey plot details. Kill Order lacks the emotional attachment to make the consequence of David’s plight feel meaningful.

Similar to May, who inexplicably silently watches as three assassins attempt to kill David, the audience is left somewhat cold by the events unfolding on the screen. This ultimately is a bit of a disservice to Chris Mark. Instead of pumping our fist in praise of the action on display, we end up wishing that his martial art talents were complimented by a better script.

Full Blood in the Snow ticket information can be found at the festival’s website.