One cannot help but think about what could have been for Dorothy Dandridge while watching Otto Preminger’s Carmen Jones. Dandridge was the first African-American actress to ever be nominated for any Academy Award in the best actress category for her work in the iconic musical, but she was never able to cash in on her star-making turn like her white contemporaries. Despite her talent and natural charisma, she was still a black woman within an industry that, at the time, was not willing to see past one’s skin colour. In the end, her demise was just as tragic as the one that befalls on her titular character in Carmen Jones.

Preminger’s film is much more than a tragedy, mind you. It is a musical that also feature elements of comedy and, due to its casting choices, offers an intriguing social commentary for its time. In keeping with the all-black cast, as was intended in Oscar Hammerstein II’s Broadway musical, the film attempts to show how universal the themes of love and jealousy are. It also serves as another example that films with a predominately non-white cast can be a hit with audiences.

Adapting Hammerstein II’s musical of the same name, which itself was inspired by both Georges Bizet 1875 opera “Carmen” and the novel by Prosper Mérimée, Carmen Jones is the classic love triangle gone wrong tale. One where lust leads to love and love leads to poor decisions. Set during World War II, the film follows the turbulent relationship between Carmen Jones (Dandridge), a sultry worker at a parachute factory, and the object of her affections Joe (Harry Belafonte), a soldier whose life was all mapped out prior to meeting Ms. Jones. Though Carmen instantly has eyes for Joe, the young army recruit’s heart belongs to his fiancée Cindy Lou (Olga James) when the two first cross paths.

It is only when Joe is ordered to take Carmen to military authorities that the dutiful soldier finds himself caught under her alluring spell. After a stint in the stockade, due to Carmen escaping his custody after a night of passion, Joe eventually reunites with Carmen only to find himself in even greater trouble. When a fit of jealousy causes Joe to strike a superior officer, he and Carmen soon find themselves on the run from the law. 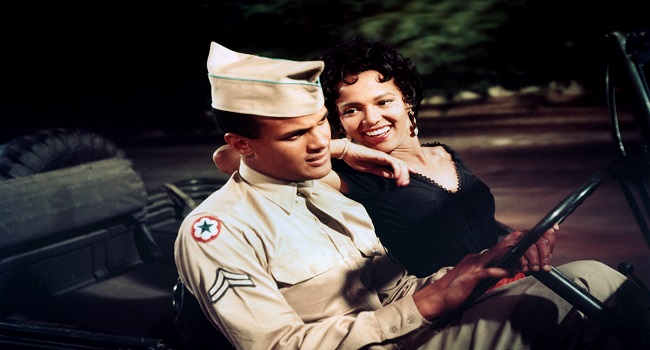 Hiding out in Chicago, and with not a penny to their name, Carmen decides to use her charms on a prizefighter, Husky Miller (Joe Adams), who has been trying to win her heart for a while. Though she is not interested in Husky romantically, his manager makes it clear that the fighter will spare no expense to have her on his arm. While Carmen sneaks around with Husky to raise some extra cash for her and Joe, her beloved eventually becomes suspicious of her actions and is consumed by jealousy.

Carmen Jones features many of the common tropes of films of 1950s, most specifically the sexually confident woman who ultimately pays the price for male insecurities, but there is also a vibrant charm to the film that still resonates to this day. Preminger’s film is a colorful and energetic romp that manages to entertain even when some sections, take Joe Adam’s first solo number for example, lack that certain flare which encapsulates most of the picture. Despite its somber finale moments, the majority of Preminger’s musical numbers, and sequences such as the train track chase, are joyous to watch.

Of course, the real reason to watch the film, aside from the lively choreography, is to see the great chemistry between Dandridge and Belafonte. Dandridge illuminates every scene she is in. She pulls off both the devilish vixen and the young woman falling in love with equal grace. While her character is initially portrayed as a callous home-wrecker, Dandridge quickly shows that there are more dimensions to Carmen. Belafonte is equally strong as the lovesick Joe who is too blind to see the downward spiral he and Carmen have fallen into. Belafonte, who similar to his co-star oozes charisma, manages to convey the prideful everyman in a believable way.

Carmen Jones may seem dated at times, but that does not mean one cannot find much to enjoy. It is a film that transcends its “made with an all-black cast” novelty by offering a universal feel, while simultaneously displaying just how special Dorothy Dandridge’s career could have been.

This review was originally published as part of our Blindspot series. Carmen Jones is screening as part of TIFF Cinematheque’s Black Star series running from November 3, 2017 to December 22, 2017.