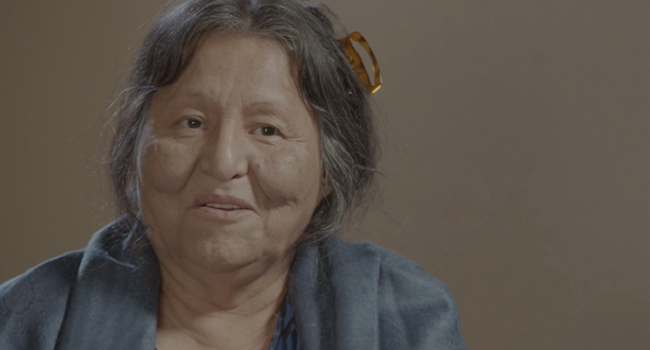 Most of us have heard about the terrible treatment of First Nations children when they were sent to residential schools. However, it’s only when we get a firsthand account of the harsh memories from a survivor do we realize exactly how much strength these children needed to get by in their day-to-day lives.

The Holy Angels Residential School outside of Fort Chipewyan, Alberta was run by the Grey Nuns from 1874 until the 1970s. Aboriginal children were taken from their families and placed in the school where they were abused and tortured in order to obliterate their native traditions, tongue and culture. With a quiet and matter-of-fact voice, Elder Lena Wandering Spirit tells of her experiences as a young charge in the school, beaten for speaking her native tongue, scrubbed because her skin was too brown; suffering the torment of a religion that was foreign to her. As she tells her story, we see a sprite of a child wandering through empty school hallways, dancing and skipping; a representation of Lena’s spirit that preservers as she sadly chuckles in disbelief at the absurdity of some of the abuse.

Director Jay Cardinal Velleneuve, driven by recordings of statements from residential school survivors for the Truth and Reconciliation Commission of Canada, captured the joyful spirit of Lena Wandering Spirit, despite the pain she endured as a child with a lovely sensitivity on an otherwise horrific subject. Although she drifts on waves of sadness, her strength shines through much like the innocent little girl lost we see on the screen. Hers is just one story among thousands documented in a film everyone should see to witness strength, grace and humanity.

Ticket information can be found at the imagineNATIVE website.