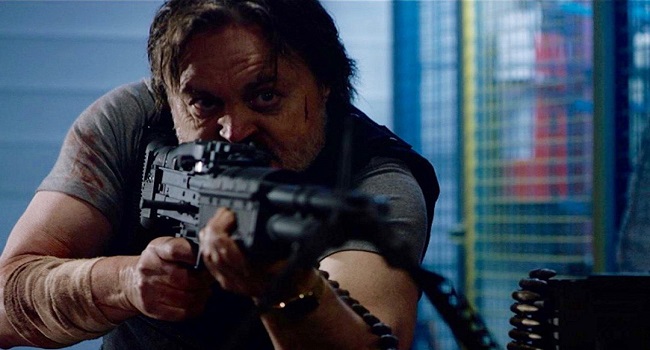 Neil Mackay’s latest action film Sixty Minutes to Midnight finds him once again reteaming with character actor Robert Nolan. This time around Nolan stars as Jack Darcy, a former soldier-turned-construction work who is filled with Y2K paranoia. Living a quiet life in East Texas, his only friend is his co-worker Markus
(Arnold Sidney), he wants nothing more than to spend the remaining hours of 1999 at home alone. Little does Jack know that fate has other New Year’s Eve plans.

As armed strangers surround his house, Jack discovers that he has been selected against his will to participate in a deadly game show. Given only sixty minutes to survive, and with a briefcase full of money as a prize, Jack must do whatever it takes to ensure that he does not suffer the same tragic ending as the shows’ last contestant.

Playing like a grindhouse version of The Running Man, Sixty Minutes to Midnight has an intriguing premise, but never fully explores the ideas it presents. The film is ripe for social commentary, but Mackay never seem interested in delving deep into any one issue. Since so little is known about the roots of the game show, or any of the generic killers it employs, one is left to simply watch the bullets fly without any deep investment to the stakes at play. Though game show host Bud Carlson (played by the film’s writer Terry MacDonald) attempts to add humour to the proceedings, the film is more concerned with reveling in the grittiness of the 70’s films it takes inspiration from.

In the end, Sixty Minutes to Midnight is a decent, though conventional, shoot’em up that had the potential to be something greater than it ultimately is.