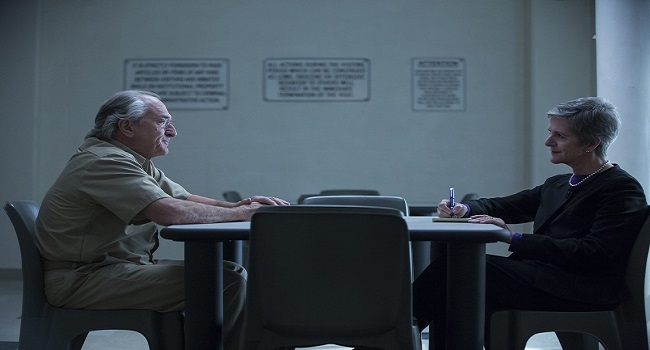 Bernard “Bernie” Madoff defrauded thousands of people out of an estimated 65 billion dollars in one of the largest Ponzi schemes in U.S. history. Instead of simply focusing on the rise and fall of Madoff, director Barry Levinson’s The Wizard of Lies takes a Shakespearian tragedy approach to the impact that Madoff’s actions had on his family.

Adapting the novel of the same name by journalist Diana B. Henriques, the film is framed around the interview that Bernie Madoff (Robert De Niro) had with Henriques (played by the reporter herself) when he was in prison. Levinson constructs the narrative in such a way that it is constantly jumping between 2008, when Madoff’s sons Mark (Alessandro Nivola) and Andrew (Nathan Darrow) turned him into the F.B.I and S.E.C. for fraud, and 2010 when Henrique interviewed him for a New York Times piece. Throughout all of this he provides glimpses into how Madoff, with the aide of chief financial officer Frank DiPascali (Hank Azaria), took advantage of laxed regulation enforcement to deceive both the poor and the wealthy.

One of the most thrilling scenes in the entire film comes when, at a black-tie party, Madoff tries to hook a big client during the 2008 financial crisis. Timing the conversation to the drum beats coming from the house band, Levison effectively shows the bottomless depths of Madoff’s greed. Like a lion in a jungle full of hunters, Madoff never let the danger of being caught stop him from going after exposed prey. While moments like this crackle with tension, it is the way that Madoff’s family, especially his wife Ruth (Michelle Pfeiffer), deals with being blindsided by the revelation of his lies that brings dramatic weight to the film.

Despite being victims of his deceit themselves, the fact that they benefitted from the lavish lifestyle Madoff’s Ponzi scheme provided meant the family was guilt by association in the eyes of many. The Wizard of Lies does a solid job of detailing the confining rock and the hard place position that Madoff’s loved ones were unfortunately placed in. The inner conflict that they endured is nicely contrasted with the callous nature of Madoff, who never seems willing to take full responsibility for the extensive ramifications of his actions.

De Niro does a great job, one of his best performances in recent years, in capturing the cold nature of Madoff. When Madoff asks Henriques if she thinks he is a bad guy? The audience clearly knows the answer, but it is doubtful that Madoff will ever allow himself to truly embrace that truth.

The Blu-ray is rather light on extras with only cast interviews which provide additional insight on the film. Thankfully, The Wizard of Lies more than makes up for the disc’s shortcoming as it reminds us of the human toll of Madoff’s greed.

Want to win The Wizard of Lies on Blu-ray? Enter our contest here.