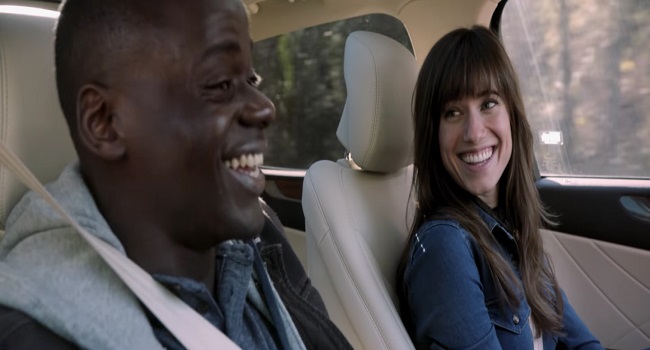 Jordan Peele’s directorial debut Get Out wastes no time in establishing both its sense of dread and its social subtext. Opening with an unnamed black man walking in a predominantly white suburb at night, it is immediately evident that no good can come of this. The man himself knows this as he nervously attempts to keep his head down and mind his own business.

It is this acute awareness of the dangers that come with being black in America, and more importantly the terror that liberal racism evokes, that anchors much of the chills in Peele films.

Playing like a racially charged version of The Stepford Wives, Get Out’s premise follows the traditional framework of an outsider discovering the horrors of a secluded local, but adds its own unique spin to the proceedings. The outsider in this equation is Chris Washington (Daniel Kaluuya), a photographer who is getting ready to meet his girlfriend’s, Rose Armitage (Allison Williams), parents for the first time. While such a meeting is nerve-racking on the best of days, the fact that he is black and the Armitages are white is a source of concern for Chris. Rose is oblivious to such fears though; outside of possible pro-Obama talk, she is convinced that her parents (Catherine Keener, Bradley Whitford) do not see colour.

So it comes as an embarrassment to Rose when her parents start code-switching when talking to Chris, routinely throwing in “my man” and such into the conversation to seem hip and relatable, and her brother Jeremy (Caleb Landry Jones) starts commenting on Chris’ genetically inherent physical attributes. Of course, this is what Chris expected. This is the type of thing he has had to deal with from white people all his life. What is more unsettling to him is the mysterious and almost robotic nature of Georgina (Betty Gabriel) and Walter (Marcus Henderson), the Armitages’ longstanding black servants.

Just as with many of the great thrillers that Peele draws inspiration from, Get Out is most disturbing when it is taking both satirical and piercing jabs at the modern world. Chris is viewed as an object meant to satisfy the curiosity and needs of those in the community that the Armitages reside in. He is expected to face questions about his sexual prowess and speak on behalf of black people everywhere. When Chris discovers what is really going on behind the Armitage’s seemingly welcoming smile, it is never as disturbing as the liberal racism based tension that Peele plays with throughout the film.

When a cop car appears, or a character picks up a gun and aims, it is clear that they do not see Chris as a person, but rather a black man. His life has no value in the eyes of that community. A fact that is unsettling on many levels.

Filled with genuine chills and a surprising dose of biting humour, thanks in part to Chris’ best friend Rod (Lil Rel Howery), Jordan Peele’s Get Out is one of the most assured and tightly crafted debuts to be release in quite sometime.