Kookie
It is always nice when a film is so charming that it makes you giddy just thinking back on it. Such is the case with Justin Harding’s delightfully creepy short film Kookie. The story follows 9-year-old Bree (Ava Jamieson) whose love of cookies takes a sinister turn when her mother buys a new cookie jar. Determined to teach her daughter a lesson, Bree’s mother brings home a cookie jar which resembles the head of a clown. One so eerie that it could easily put an end to the creepy clown craze sweeping the internet. Torn between her desire a for sweet treat and her fear that the jar may actually be evil, Bree learns the hard way that there is a price to pay for getting one’s hand caught in the cookie jar.

Weaving an unnerving and entertaining tale out of a rather simple premise, Harding’s film is a true crowd-pleaser. Taking the audience back to their childhood, when fears of even the most mundane objects seemed magnified, Kookie evokes some well-earned chills. While the film does run a smidgen longer than it really probably should, it never loses the interest of the viewers thanks to Jamieson’s wonderful work in the lead role. Despite being her first performance, Jamieson effortlessly glides from cocky to fearful to unhinged all the while exuding an infectious charm. A pleasant surprise from start to finish, Kookie is a devilish treat that is well-worth your time. 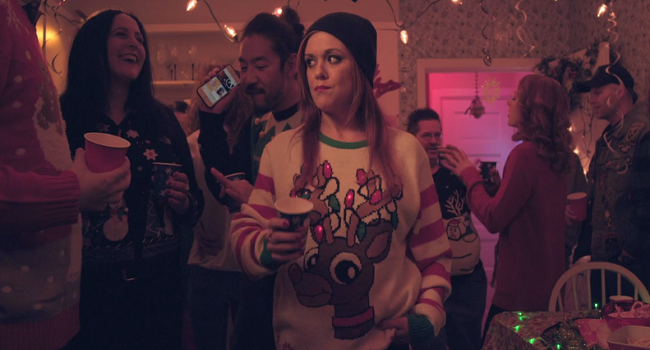 Do You See What I See?
In Do You See What I See? directors Justin McConnell and Serena Whitney use the season of Christmas cheer to springboard into a little slasher fun. On the day of her sister Jessica’s (Jorjia Cadence) ugly sweater house party, Sloan (Caleigh Le Grand) wants nothing more than to survive the night without getting on her control freak sibling’s bad side. As the party kicks into high gear, neither Sloan nor the rest of the guests are aware that a deadly party crasher is in their midst.

One of the great things about McConnell and Whitney’s engaging short film is the time it takes to build the dynamics between Sloan, her sister, and Jessica’s husband Chris (Adam Buller). By time the bodies begin to pile up, the audience already feels at home with the three central characters. So much so that figuring out who is the killer is not as important as observing how Sloan and the others react to having an intruder in the house. As entertaining as the film is, the out of left field ending will surely throw some for a loop. By throwing in a technological slant, the film poses a really thought-provoking commentary on the modern nature of violence. Hopefully McConnell and Whitney will explore this theme even further in their next film. Featuring solid performances, especially from the consistently strong Le Grand and scene-stealer Candence, and offering just the right amount of thrills, Do You see What I See? is one killer party.