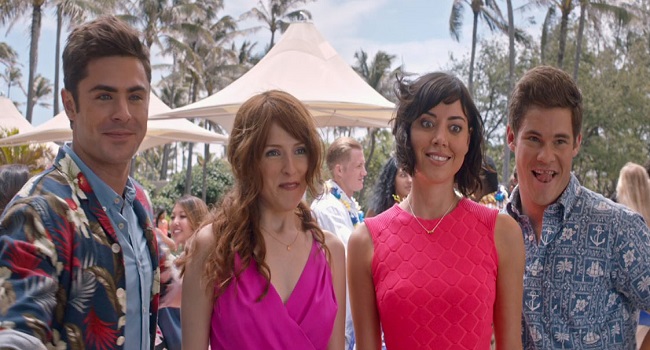 Mike and Dave Need Wedding Dates is one of those comedies that relies on the viewer blindly buying into its implausible premise. Mike (Adam Devine) and Dave (Zac Efron) are fun loving brothers who like to party hard. Their drunken antics are legendary and have ruined numerous family gatherings in recent years. With their sister’s wedding approaching, their family has issued an ultimatum that they are not allowed to show up without dates. Apparently if they come with respectable women on their arms it will quell their usual routine of getting sloshed and hitting on every female in sight, or at least that is what their family hopes will occur.

Placing an ad on Craigslist offering two “nice girls” a free trip to Hawaii, the dim-witted duo become a viral sensation as women from all over the city vie for the all-inclusive getaway. Two ladies in particular who have their eyes on a much needed vacation are Tatiana (Aubrey Plaza) and Alice (Anna Kendrick). Recently fired from their jobs, and with Alice still getting over being dumped at the altar, the pair will stop at nothing to win the prize. Of course, they will have to figure out how to keep their party girl demeanors under wraps long enough to make it through the wedding.

Jake Szymanski’s comedy may not add anything new to the genre, nor is it anywhere near the funniest film of the year, that honour goes to Toni Erdmann, but it works for what it is. Mike and Dave Need Wedding Dates takes the classic men behaving badly tropes and flips it on its head. While Mike and Dave may not be the sharpest tools in the shed, it is Tatiana and Alice who get the biggest laughs in the film. Plaza and Kendrick embrace their bad girl ways with a vigor that is infectious. As silly and juvenile as the film is, I cannot deny that it had me laughing throughout. We all need a bit of mindless humour now and then, especially after a long at the office, and this film pleasantly fills that void.

The Blu-ray/DVD/Digital HD combo pack, it is also available on 4K UHD, released by Twentieth Century Fox Home Entertainment comes filled with special features. The deleted scenes offer a few chuckles, but it is the Funny or Die Shorts on the Blu-ray that make the extras worth taking a gander.