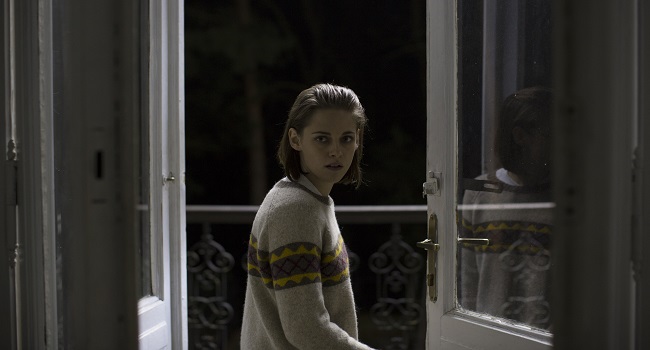 Reuniting once again with his Clouds of Sils Maria star Kristen Stewart, Olivier Assayas’ latest is a ghost story that breaks away from the conventions of its contemporaries in the genre. Assayas constructs a story that offers an interesting approach to grieving in the digital age. At the center of his film is Maureen (Stewart), a young woman who loves being in Europe, but is dissatisfied with her job of being a personal shopper. Working for a celebrity, Kyra (Nora Von Waldstätten), who she rarely sees, she spends most of her days going to high-end stores to secure jewelry and clothing for her client. Maureen also happens to be a medium, though her gift does not seem to be as strong as her twin brother Lewis’ before he passed away from a congenital heart condition.

Aimlessly going through the daily motions in Paris, Maureen waits for Lewis to send a sign from the afterlife. Little does she know that such a supernatural feat is closer than she thinks. When friends show interest in buying her old family home, Maureen is commissioned to find out if there are any linger spirits inhabiting the place. At first Maureen is unsure of whether the presence she feels is actually a paranormal entity or merely a figment of her imagination. After further investigation into the house leads to an unexpected encounter with a ghost, a paranoid Maureen begins to receive mysterious text messages on her phone.

Unsure of who or what is sending the messages, many of which become increasingly personal in nature, Maureen finds herself drawn into a mystery that could potentially have dire consequences. It is here where Personal Shopper moves from simple ghost story to a subtle commentary on connection and technology. Assayas shows how easily technology has, for better or worse, become the go to tool for combating loneliness and reshaping identities. The strange sense of anonymity that technology provides is viewed as something to be cautious of.

As Maureen opens herself up to the unknown messenger, and begins to transform into that which she is not, her sadness only becomes more prominent, and the danger around her becomes more real. Where the film stumbles a bit though is in its overly long depiction of the initial back-and-forth text conversation. The sequence is as exciting as siting at a bar and watching two people at the same table stare at the individual phones for twenty minutes. Thankfully there is enough in the overall mystery, and in Maureen’s quest to understand her purpose, to keep the film interesting despite these missteps.

Due to the nature of the film, Personal Shopper will more appeal to the art house crowd than it will hardcore horror fans. While the film does not hit the heights of Assayas and Stewart’s previous outing, it is still an intriguing entry into the ghost story genre.

Tickets can be purchased at tiff.net