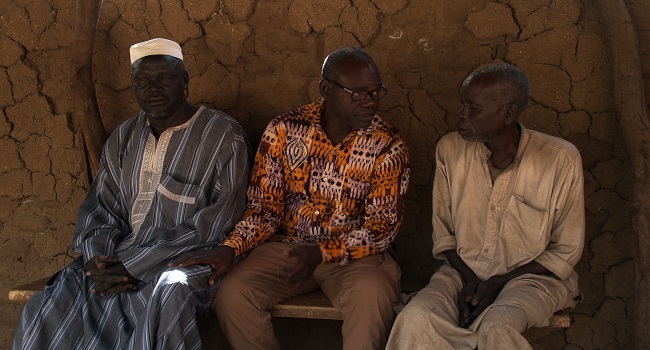 After years of perfecting his craft in the realm of narrative storytelling, renowned African director Mahamat-Saleh Haroun (A Screaming Man) makes the leap to non-fiction with Hissein Habré, A Chadian Tragedy. The film explores Chadian dictator Hissène Habré’s horrific reign of terror during his 1982 to 1990 presidency. Under his rule innocent people were sent to prison on false charges of being Libyan spies commiserating against the government and a slew of other charges. Spending years living a comfortable life after leaving office, it took until 2016 before Habré was tried for his numerous crimes against humanity, including ordering the murders of 40,000 people.

Interviewing many individuals who were tortured and imprisoned during Habre’s time in office, and following them as they fight to bring the ruthless dictator to justice, Haroun shows that the reverberations of Habre’s action are very much present today. Baring their physical and emotional scars, the victims share countless stories of family members being taken, horrendous prison conditions and routine beatings or worse. It is disturbing to hear the unrelenting lengths that the DDS, Habre’s police force, employed to torture and mutilate civilians. In an early scene reminiscent of Joshua Oppenheimer’s The Look of Silence, one of the victims confronts his former DDS abuser. The experiences of the past have clearly taken its toll on both men. Though the officer pleads that he was merely “a dog trained to attack,” his face does hide the years of guilt that has haunted him.

Being his first foray into documentary filmmaking, Haroun takes a rather conventional approach when structuring his film. He never resorts to showing any graphic images of the DDS’ crimes, opting rather to let the victims’ testimonies, and a few drawn images, paint a vivid picture in the viewer’s mind. Despite the horrific atrocities that the civilians endured, Haroun’s film effectively taps into the resilient power of the human spirit. Through organizations like Victims of the Crimes of the Hissène Habré Regime, created by activist and former prisoner Clement Abaifouta, many victims have not only found a support network, but also have gained access to the medical attention they were denied in prison. The uproarious celebration that erupts from the members of the organization, when word spreads that Habre will be brought to trial, momentarily warms the heart. However, as we see throughout Hissein Habre, A Chadian Tragedy, the citizens still have a long way to go before the scars from Hissène Habré‘s reign can truly heal.

Tickets can be purchased at TIFF.net