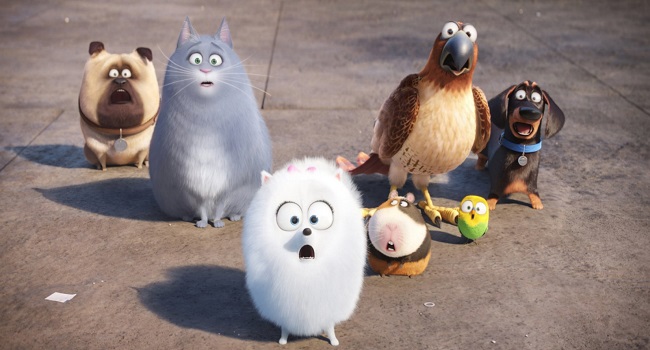 Since bursting onto the scene with 2010’s Despicable Me, Illumination Entertainment has slowly established themselves as a worthy competitor to the Pixar throne. While they have struck gold with the Despicable Me/Minions franchises, and The Lorax to a certain extent, the company needed prove that they are more than blue overalls and yellow banana loving creatures. Fortunately, their latest offering The Secret Life of Pets, achieves this and then some. It not only provides the company with another possible franchise to branch off into, but it is just downright fun.

Katie (Ellie Kemper) and her terrier Max (Louis C.K.) have a special kind of relationship. One that goes far beyond the simple owner/pet dynamic, at least that is how Max sees it. Believing nothing can come between their bond, Max is shocked when Katie brings another dog, Duke (Eric Stonestreet), home from the pound. Unable to find common ground, the two roommates engage in a battle of wits to see who truly has claim over Katie’s home and heart. However, when their feud leads to an accidental encounter with a group of feral cats, led by Ozone (Steve Coogan), and they end up in the clutches of Animal Control, the pair quickly realize that they only have each other to rely on.

This becomes especially apparent when they are rescued by a rabbit named Snowball (Kevin Hart), the short-fused leader of a rag tag group of discarded pets, who as a vendetta to exact on humans. As Max and Duke try their best to evade Snowball and his gang, their friend Gidget (Jenny Slate), who has a longstanding crush on Max, enlists the help of the other neighbourhood pets, and one carnivorous hawk, Tiberius (Albert Brooks), to venture into the city and find the missing dogs.

The Secret Life of Pets may carry many glaring similarities to Pixar’s Toy Story franchise, especially in regards to the two main characters needing to go on an epic journey in order to learn how to co-exist in the same space, but the film is entertaining enough that audiences will not mind one bit. Children will eat up the film’s cute characters, while adults will find delight in the hilarious supporting characters. Several of the best moments in the film involve Albert Brooks’s delicious turn as Tiberius, a character who is always fighting one-step away from succumbing to his animal instincts, and Kevin Hart’s wonderfully off-kilter work Snowball. Hart in particular is quite good in the villainous role, which is well suited for his rapid-fire delivery.

It is just a shame that the final act inexplicably decides to soften up Snowball’s character for a few cheap gags. The film’s scattered logic really becomes evident in this section, and the payoff does not feel as satisfying as it should. However, by the time audiences reach this section, they have already been won over by the unabashed charm of it all. Though not as strong as the films in the Toy Story series, which it clearly strives to be, The Secret Life of Pets still manages provide a plenty of laughs to satisfy all ages for a few hours.