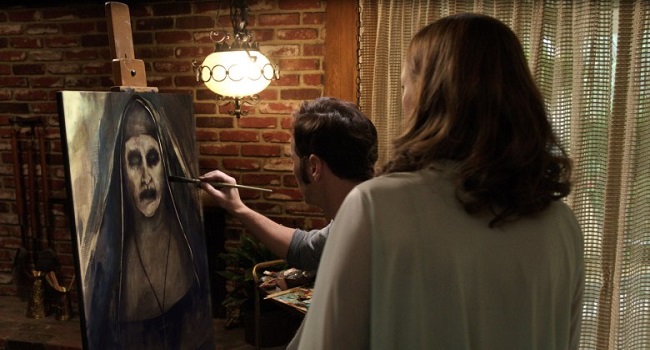 After the surprise success of The Conjuring, which recounts true events of a possession investigated by famed paranormal duo Ed and Lorraine Warren, director James Wan’s is back to give fans the follow-up they had hoped for. The Conjuring 2 takes the Warrens to England to debunk The Enfield Haunting, one of the most reported cases of paranormal activity.

Peggy Hodgson and her four children Janet, Margaret, Johnny and Billy were the subjects of a media storm in 1977 when reports of violent poltergeist attacks on their Enfield, North London home kept them from living a normal life. It is well documented, and often challenged by skeptics, incident that will go down in history as a direct rival to the Amityville Haunting.

The sequel starts in Amityville in 1976, where Ed (Patrick Wilson) and Lorraine (Vera Farmiga) are in the middle of a séance trying to find out what happened in the Lutz household. The home is the site of the infamous 1974 Defeo murders which is allegedly what led to the Lutz family to their ordeal with malevolent paranormal forces. During this trying psychic investigation, Lorraine sees the murders happening as well as a worrying premonition of Ed’s death. She has become frightened for Ed due to this ominous sign, and wants to stop taking on new cases. At the same time in England, 11 year-old Janet Hodgson (Madison Wolfe) is thrown from her bed, transported to different rooms, hears voices and banging on the walls, and is possessed by an entity that soon terrorizes the entire family on a regular basis. She is the main conduit for this spirit, who manifests itself during a TV interview, creating a frenzy in the town.

Word gets back to Ed and Lorraine, who is still having terrifying premonitions, and they are asked to go to England and look for proof of a real paranormal occurrence in the Hodgson’s home. Lorraine is reluctant, but agrees to go as long as they are able to leave if any danger is evident. Once they arrive, they’re faced with the task of sifting through the distraught family’s experiences, eager investigators and Lorraine’s strange lack of paranormal feelings. They wonder whether there is any truth to this haunting while trying to help a troubled little girl and her family.

I really enjoyed The Conjuring 2. It’s a touch long at 2 hours and 14 minutes, but it starts off with a wonderful bang as we’re dropped right into the Amityville fray. The fantastic camera work and creepy scenes sets the tone right away. Wan did the same with the Insidious series, continuing the story right away instead of bogging the film down with superfluous characters or story arcs. He stays true to the accounts of the Enfield case and keeps his signature James Wan creepiness by introducing yet another toy destined to end up at the Warrens’ museum of haunted items.

I love Ed and Lorraine Warren, and thoroughly enjoyed the first Conjuring film for its tension, old school horror and great performances, all of which is repeated here. Farmiga and Wilson riff well off each other once again as the devoted duo, and the cast, especially Frances O’Connor as the frazzled Peggy, do a commendable job. Look out for Wolfe who plays Janet with a simple intensity that effectively embraces the trauma a little girl might experience in that situation. Wan did take some liberties with the story, the real Warrens were reported to have only visited the Hodgsons for about a day and, according to several accounts, didn’t actually solve the mystery of the haunting, but changes do not take away from the film. Plus, Wan stayed consistent with the couple’s tag-team approach to ghost hunting and their devotion to each other.

My only real issue with the film was the love story between the Warrens. It was proven in the first Conjuring, and felt overdone in the sequel. The scene where Ed sings an Elvis song to boost the Hodgsons’ morale and show his love to Lorraine changed the pace and tone to a distracting level. To me it didn’t feel necessary. This is minor quibble though, as the paranormal takes center-stage again soon after.

I highly recommend seeing The Conjuring 2, but I would suggest watching the 2015 British produced mini-series The Enfield Haunting starring Timothy Spall (available on A&E and Shomi) as a primer before seeing the film. It’ll give you a good background on the actual events, and make the Wan film that much more enjoyable.