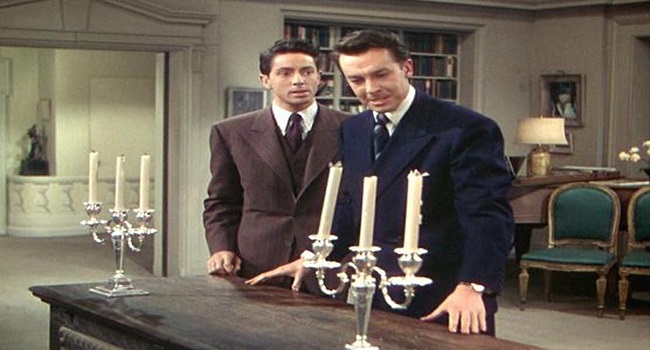 “I wonder what Alfred Hitchcock would have thought of Donald Trump?” A strange thought, I know, but this is what crossed my mind while watching May’s Blind Spot selection Rope. Though the narrative of the film focuses on two killers there is something more disturbing at play. The most chilling thing in the film is not the central murder that takes place in the opening frames, but the ideology behind it.

The killers in the film are not your typical shady individuals. They are not in dire straits financially nor are they jilted lovers committing crimes of passion. No Brandon Shaw (John Dall) and Phillip Morgan (Farley Granger) are men of status. Young, educated, and wealthy, by all accounts they embody the ideal image of success. Under their perfectly coiffed hair though is a darkness, a strange sense of entitlement that they smugly flaunt at every opportunity.

Shaw and Morgan are so brazen that they not only kill their former classmate David Kentley (Dick Hogan), but also proceed to throw a party at the scene of the crime and invite Kentley’s family and friends, who are unaware of earlier events. Why do such a thing? Well, the answer is the same reason for killing Kentley in the first place…because they can. The pair’s actions are fueled by their perceived sense of superiority. A notion ingrained in them by their former headmaster-turned publisher, and fellow party guest, Rupert Cadell (James Stewart), when they were still impressionable students.

Teaching the concept that murder is a justifiable art reserved for a select few privileged individuals, a viewpoint that Cadell admits during the party he still supports, the then headmaster could never have imagined the power his words carried. In fact his sole purpose for being invited to the party is so that Shaw can prove to himself that he is now smarter than, and thus superior to, Cadell. Hitchcock frames Cadell as the hero of the film, the reluctant amateur sleuth who is the only one at the party that realizes something is amiss, but he is essentially the catalyst for what Shaw and Morgan have become.

Though the film is staged in such a way that it mimics a real time feel, with Hitchcock going out of his way to try and fool audience into thinking the whole story unfolds in one continuous shot, I could not help but envision a younger version of Cadell embodying the same influential presence as Donald Trump on the election trail. Trump’s election rallies have become feeding grounds for those who fill their bellies with the notion of a privileged America. One were being wealthy, or simply white, is reason enough to display one’s superiority over those deemed “the other.”

While Trump does not outwardly preach for the artistic merits of murder, or directly promote crime in anyway, his speeches often paint a picture on an idealistic version of America over the fractured canvas of reality. One that alludes to a time where violence, be it against demonstrators and those he considers to be traitor, had its place in society. Similar to Cadell, his words infect the minds of the young and impressionable, even if he does not mean for them to be taken literally. One hopes that there will not be a modern Shaw or Morgan born out of Trump’s rhetoric, however, as Rope shows us, the allure of being able to hold one’s head above others is often too tempting to ignore. Plus, not everyone views this brand of hatred and violence as a crime.

Hitchcock’s film astutely points this out early on when Shaw tells a nervous Morgan that “the only crime is to commit a mistake.” The mistake in question is simply being of weak will. The film debunks this though by showing their mistake is their overall arrogance.

In attempting to be superior to those around them at all times, stopping short of taunting their guest like children, Shaw and Morgan make a series of crucial oversights. Mistakes that Hitchcock’s camera takes delight in playing up. Whether it is the initial quick shot of the piece of rope hanging from the chest that holds Kentley’s dead body, or the way the camera plants itself beside the chest and patiently waits as the housekeeper, Mrs. Wilson (Edith Evanson), slowly carries several stacks of books from the top of it into another room, Hitchcock frequently reminds the viewer that nothing good can come from egotism.

Again, I wonder what Alfred Hitchcock would make of the Donald Trump era that we are in?