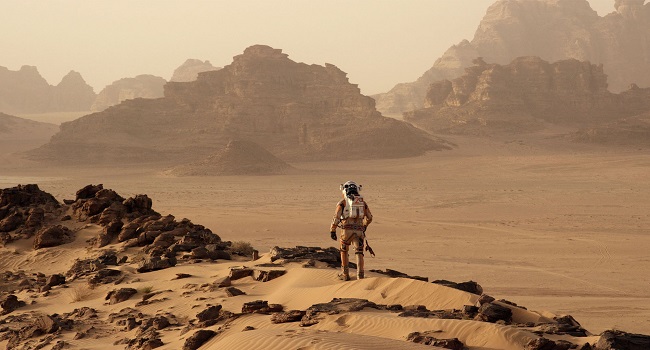 After wowing both audiences and critics, and garnering seven Academy Award nominations, The Martian returns today on Digital HD, DVD, Blu-ray and 4K Ultra bigger and better than before. Released by Twentieth Century Fox Home Entertainment, The Martian Extended Edition features ten minutes of brand new footage and over two hours of special features. In short, this is the version of the film fans have been waiting for.

Based on the novel by Andy Weir, Ridley Scott’s The Martian is one of those rare science fiction blockbusters where the star-studded cast takes a backseat to the science itself. When a violent storm interrupts a team of NASA astronauts conducting research on Mars, the evacuating crew reluctantly leave Mark Watney (Matt Damon), who was hit by flying debris from their own antenna, behind under the presumption that he is dead. Little do they know that Watney has actually survived the freak accident and is stranded on the arid planet. With death looking imminent, Watney uses his scientific ingenuity to do everything he can to overcome the harsh conditions. Meanwhile on Earth, an embarrassed NASA scrambles to salvage a rescue mission before it is too late.

The Martian is a film that excites and entertains science enthusiasts and average viewers alike. Science is not simply a tool for saving Watney’s life, Scott’s film makes it downright cool. Playing like a botanist version of MacGyver, the ingenious ways in which Watney, and the folks at NASA, manage to tackle each new problem that arises is exhilarating to watch. Presenting the science in a digestible manner, while never talking down to its audience, and featuring strong performances from the ensemble cast, The Martian is more than your typical blockbuster.

The 2-Disc Blu-ray is packed with plenty of treats to keep viewers satisfied for hours. Fans will take delight in listening to the informative Blu-ray commentary track by director Ridley Scott, writer/executive producer Drew Goddard and author Andy Weir. There is also an interesting Q&A panel discussion with NASA experts regarding the planned journey to Mars, as well as a documentary on how the planet was recreated for the film.