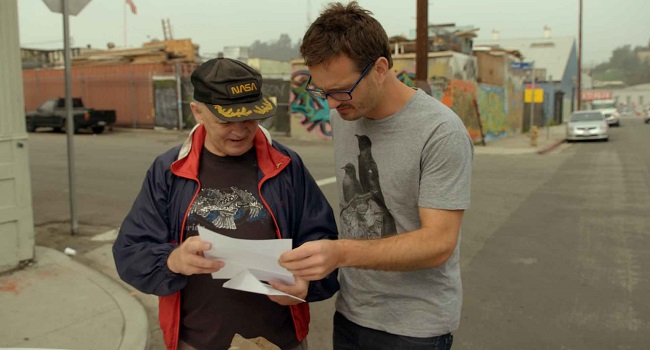 It is normal to be a bit skeptical when a film comes with a disclaimer to go in knowing as little as possible. Aside from unfairly raising expectations, such a warning often leads viewers to anticipate, and often seek out, an M. Night Shyamalan type of surprise ending. However, there are times, take David Farrier’s marvelous film Tickled for example, when such a warning is warranted. Similar to experiencing a new rollercoaster for the first time, Tickled is a film that works best when you sit back and enjoy all of the unexpected twist and turns its story has to offer.

Popular television journalist David Farrier has made a career of reporting on the oddities within pop culture. Stumbling across a video online for a sport called “competitive endurance tickling,” Farrier decides to write a story on this seemingly comical league. However, the organizers do not consider their sport a laughing matter. In fact, they not only decline Farrier’s request for an interview, but also lace their responses with hateful personal attacks towards the journalist and his lifestyle.

Stunned by the harsh, and unprovoked, remarks, Farrier decides to delve further into competitive endurance tickling to understand what would cause such an outburst. What Farrier uncovers is a story so absurd and complex that it would leave even the great writers of fiction scratching their heads in disbelief.

One thing that makes Tickled so fascinating is the way the film effortlessly transitions tones throughout. What starts off as a jovial look at the world of competitive tickling quickly turns into a dark exploration of the nature of power. A perfect example of this arrives when Farrier gets to witness an actual tickle video being made. The sequence glides from being silly to erotic to disturbing before the viewer has time to process it all. By the end of the scene the audience cannot help but feel a bit dirty, as if they have just watched the tickle equivalent of a snuff film.

The fact that Farrier is such an engaging, and seemingly sincere, guide into this bizarre underworld only further adds to the story’s inescapable allure. It can be argued that some sections in the last act could have been a bit tighter; however, Farrier does a such a wonderful job of keeping the audience hooked on the mystery, while navigating through the film’s snake style curves, that such quibbles can be forgiven. While it may be blunt to recommend the film by simply saying “just go see it,” that is exactly what one needs to do. Tickled is the type of jaw-dropping story that you will want to discuss at great lengths immediately after it ends. Just make sure you don’t ruin the thrilling experience for those who have not seen it. Similar to Fight Club, the first rule of Tickled is that you don’t spoil Tickled.