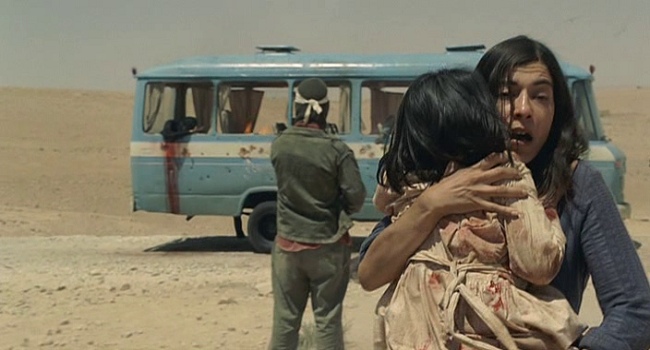 Denis Villeneuve’s 2011 Oscar nominated film Incendies is a stunning piece of storytelling. It is a thriller in which the journey towards uncovering the central mystery is as shocking as the revelations at the end of the quest. Depicting the senseless nature of religion based conflict, and the complex family bonds that emerge from within it, Villenueve weaves a tale full of twists, pain, and unflinching paternal love.

After their mother’s, Nawal (Lubna Azabal), passing, twins Jeanne and Simon (Melissa Desormeaux-Poulin and Maxim Gaudette) are stunned to discover that she has left them two letters. The first letter instructs Jeanne to search for the father that they have never known, while the second asks Simon to seek out the brother they never knew existed. It is only when these two tasks are accomplished that the siblings are allowed to proceed with their mother’s burial.

Despite Simon advising against it, claiming that the will is nothing more than a ranting from a crazy woman, Jeanne sets out to her mother’s Middle-Eastern place of birth in hopes of gathering information about their relationship and his possible whereabouts. A task that will not only expose many secrets about her mother’s life prior to immigrating to Canada, but will also force the siblings to confront some dark truths about their heritage.

Based on a play by Wajdi Mouawad, there is an intricate fluidity to the way Villeneuve juxtaposes Jeanne’s journey with that of her mother’s. While the sibling’s mission may be the catalyst that brings the audience into the main mystery, it becomes evident early on that Nawal is the true linchpin to the entire film. As one woman condescendingly tells Jeanne on her travels “you’re looking for your father, but you don’t know who your mother is.” This notion of not truly knowing the individuals closest to us is one of the prominent themes throughout the film. It is only in death that Nawal’s life story truly begins for Jeanne and Simon.

As if unknowingly living with a complete stranger for their entire life, Nawal’s story, told in flashbacks, opens the twin’s eyes to the true horrors that occur in the name of faith. Nawal is the embodiment of the ways in which religion can consume and reshape beliefs and identity. Born a Christian, she brought disgrace to her family name, one which seemingly still lingers decades later, and inadvertently sets her on a turbulent path, when she fell in love with a Muslim. After getting caught in the middle of the conflict between Christians and Muslims, and witnessing the ruthless nature war, Nawal became radicalized to the point where she no longer reflected the woman she once was. The only link to her past self was her unwavering desire to be reunited with the child she was forced to give up.

The idea of losing one’s self within the brutal cycle of hate is a recurring point Villeneuve touches on in the film. From the opening frames, where André Turpin’s cinematography beautifully captures the stern eyes of a young boy getting his head shaved, there is a darkness that hovers over the film. One of the fascinating things about Incendies is that it manages to feel harrowing without ever being exploitive. Villeneuve does not ease up on the cruelty, but conveys it in such a way that puts the audience through the wringer without actually showing them anything too gruesome.

Constructing a tale that continually pulls the rug out from underneath the viewer, without taking anything away from the powerful journey of identity that the characters endure, Incendies is a near flawless film. While it can be argued that there was no real reason for the siblings to be sent on such a task -truth be told, Nawal could have spared them such a journey by simply divulging what she knew- there is something important about being forced to walk in the same steps as one’s parents. It creates a level of personal understanding that mere words cannot reach. Furthermore, it makes for thrilling drama which this film has in spades.