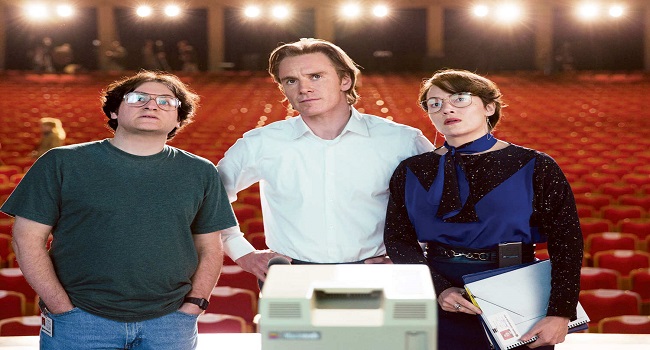 Based on the biography by Walter Isaacson, Steve Jobs is an unconventional bio-pic about the co-founder of Apple Computers. The film is told in three different time periods, around three different landmark products being unveiled between 1984 and 1998. Directed by Danny Boyle and written by Aaron Sorkin, the film explores the life of Steve Jobs as he frets over launching each of the three products, contends with egos, troubleshoots last-minute changes, and deals with issues in his personal life.

Through Aaron Sorkin’s very inventive and complex screenplay, the film offers a unique structure that doesn’t just highlight Steve Jobs’ (Michael Fassbender) evolution as a man and artist, but also the way in which technology rapidly evolved as well. The first act centers around the launch of the Apple MacIntosh in 1984, and his conflict with Apple co-founder Steve Wozniak (Seth Rogen) over whether the Apple II team should receive acknowledgement for creating the MacIntosh. The middle section is set four years later as Jobs, after being fired from Apple, tries to launch the NeXT computer to the masses, a product that isn’t firing on all cylinders. The final act takes place a decade later when Jobs, within two years of returning to Apple, launched the iMac, a product that single-handedly saved the floundering company.

Amidst all of the struggles that came with his professional life, Steve Jobs delves into many aspects of Jobs’ personal life as well. Specifically the relationship with his illegitimate daughter Lisa Brennan-Jobs (played at different ages by Makenzie Moss, Ripley Sobo, and Perla Haney-Jardine respectively), whom he denied fathering. Jobs’ denial adds to the drama in the film and, in an intriguing way, becomes a positive for Lisa as he tries to make things right later on. Also adding to this sense of personal conflict is Kate Winslet’s strong performance as Joanna Hoffman. She is the film’s conscious, the one who is constantly aware of the despicable things that the perfectionist Jobs does, but simultaneously understands what he is trying to achieve with his work. In wanting Jobs to do what is right, Hoffman is the perfect counterpoint to the demanding Jobs.

Sorkin’s dialogue, including his frenetic approach to monologues, works well with Danny Boyle’s style of direction. Through the use of tracking shots, following characters backstage and dressing rooms, Boyle not only showcases the warts that came with product launch rehearsals, but also complex, and heated, exchanges that Jobs had with those he interacted with. The dialogue really comes to life when Boyle focuses on the conversation between Jobs and then-Apple CEO John Sculley (Jeff Daniels) over the former’s firing from the company.

While both Fassbender and Winslet each give amazing performances, it’s the supporting cast who truly add to the richness of the film. Regardless of whether it is the trio of actresses who play Lisa, Katherine Waterston work as Lisa’s mother, or Michael Stuhlbarg’s turn as Apple programmer Andy Hertzfield, each actor brings something integral to their role. Jeff Daniels is excellent as John Sculley, a man who wants to help both Jobs and Apple, but often worries about the implications of Jobs’ increasing demands. However, of all the supporting actors, it is Seth Rogen’s performance as Steve Wozniak that will stick with audiences long after the film is done. Rogen is a revelation in the role, he brings a surprising amount of layers to a seemingly straightforward character.

Steve Jobs is an extraordinary film from Danny Boyle that features a top-notch screenplay and an incredible performances. It’s a film that isn’t afraid to portray a man in an honest and often unlikable way. Painting a compelling portrait of one man’s desire to change the world, Steve Jobs is a phenomenal film not be missed.