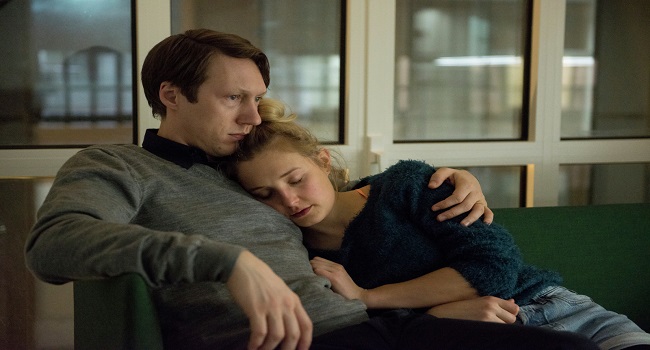 Charlotte (Ine Marie Wilmann) teaches dance to young children in Oslo. One day, a man (Simon J. Berger) visits her at her studio. “I just wanted to have a look at where you work,” he tells her, but he soon turns hostile: “I don’t quite understand what you’re up to. You were sneaking around my house, looking in…both you and your self-possessed mother should stay away, get it? Go to hell!”

“Who was he?” asks Marte, her best friend. Charlotte’s response: “My brother.”

This revelation comes as a bit of a shock: this is the first time we see Charlotte’s brother (actually half-brother), whose name is Henrik, and the first time we hear of her or her mother visiting his house. This is representative of Homesick’s biggest flaw: its director and co-writer, Anne Sewitsky, provides some backstory but little context for the characters’ behavior. Charlotte certainly seems troubled: she rants to her therapist about how she hates her mother; at Marte’s wedding, she filches a family heirloom. But how her past experiences resulted in her present state of mind remains vague, like an equation you can’t quite resolve.

Charlotte and Henrik soon overcome their awkwardness and become closer. Despite Henrik being married with a child and Charlotte being in a relationship–with Marte’s husband’s brother, a musician away on tour–the two become lovers. Henrik leaves his wife, never to appear or be mentioned in the film again, the screenplay having no further use for her. Sewitsky keeps all the characters at an emotional distance from the audience. We never see deep enough into their psyches to understand why they do the things they do.

As a film, Homesick is as cold as a Scandinavian winter; pretty to look at, but something I could never really warm up to.

Ticket information can be found at the TIFF website.

Groovy, laidback, and nasty View all posts by Lackey