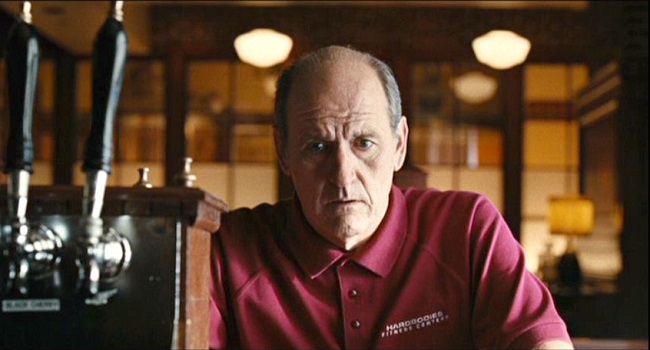 I’ve been moved by the performances of Richard Jenkins.  There’s something so honest and real about the man.  His acting is so natural and effortless that you don’t see the acting. He’s the Everyman able to portray any character with complete believability.  With over 70 films to his credit, Jenkins has portrayed everything from a gay FBI agent, to a dead mortician, to a sexist father, to a judge.

I think about his recurring character on the HBO hit Six Feet Under and how he’d appear unpredictably at different intervals of the other characters’ lives.  Likewise, his appearance in certain films has been unpredictable to me either because I didn’t know that Jenkins was in the movie or because his performance was so impressive that it actually elevated an otherwise mediocre film. It would be easy to write about the great films that Jenkins has starred in – Flirting with Disaster and The Visitor – but I’m going to focus instead on the performances Jenkins has delivered that have elevated otherwise mediocre or underrated films.

The first that comes to mind (probably because I watched it most recently) is Eat, Pray, Love, the Julia Roberts-led vehicle based on the 2006 memoir by American author Elizabeth Gilbert.   Jenkins stole all of the praise from Julia Roberts whose performance was viewed by critics as underwhelming.  Instead, Jenkins was lauded across the board as representing the best moments in the movie and I’d have to agree.  The scene in which Jenkins shares the grim story of what brought him to India in search of enlightenment are the best five minutes in the film.  Director Ryan Murphy fixes the camera on Jenkins through his entire monologue and it’s a very wise and effective move as it allows the scene to play out with Jenkins in full focus.

In Dear John, Jenkins plays father to John (Channing Tatum), a member of the Army Special Forces who returns to the Carolina coast in the spring of 2001 and falls in love with a college student named Savannah (Amanda Seyfried). Dear John is predictably sweet, sentimental and sad, but not particularly memorable or special apart from a scene-stealing turn by Richard Jenkins as an obsessive coin collector who Savannah believes suffers from a mild form of autism.  Jenkins, as John’s quiet, taciturn, strangely-mannered father is the film’s lone redeeming feature.

In Friends with Benefits, Richard Jenkins is just one member of a surprisingly charming cast that does well with the thin material they’re given.  Mila Kunis is vibrant, Justin Timberlake is charismatic, Woody Harrelson is wildly energetic, the too-rarely seen Jenna Elfman is a treat to watch, Patricia Clarkson shines and Richard Jenkins moves me once again.  Like in Dear John, Jenkins portrays a father with a mental affliction.  He has Alzheimer’s.  Jenkins finds the perfect balance in portraying his character’s moments of clarity and coherence with moments of forgetfulness and confusion.  He makes brilliant, insightful observations about relationships and life and then walks around without his pants on and frequently forgets that his wife left him a decade ago.  It’s quite a nuanced performance in a film about two friends getting it on.

In Shall We Dance, Jenkins plays a private detective hired by a suspicious wife (Susan Sarandon) to follow her husband (Richard Gere).  This is a role that didn’t require a great deal from him, but Jenkins still managed to turn in a splendid performance.  In one memorable scene, Sarandon’s character asks Jenkins’ character why he thinks people marry.  He believes that people marry for passion.  The wife disagrees.  She believes that people marry because they need a witness to their lives.  Jenkins’ character sits silently as he listens to her, his eyes focused on her with attentiveness and compassion, and it’s in this very simple act, sitting silently, where Jenkins displays his gift for acting; the type of acting that doesn’t look like acting at all.