There are certain milestones that every parent secretly awaits with anxious anticipation. Some of these typically include the first day of school, that moment when they master riding a bicycle without training wheels, or even the day they stroll down the aisle to profess their undying love to that special someone. As you can imagine, being a lover of all things film, one of the milestones on my list was taking my son to the movie theatre for the first time. Not as thrilling as envisioning him becoming the first black Canadian Prime Minister, I know, but even Rocky needed a few attainable goals before setting foot in the ring.

Making a conscious effort not to impose my love of cinema on my son, he should have the right to pick which forms of art he feels drawn to; I always assumed it would be at age seven when he would first step into a theatre. After all that was the age when I ventured into the darkened halls of a theatre for the first time to see Transformers – the animated one from the 80’s, not the increasingly overblown drivel Michael Bay puts out every few years. However, after observing the ways my son patiently watched films like Wreck-It-Ralph, and the Cars franchise, at home, my wife and I agreed that, at age four, he might be ready to for the true cinematic experience. It was not an easy decision to come to, but we knew we had a good handle on how our child handles public spaces.

Plus, similar to Sherlock Holmes, I did a little bit of investigating well in advance of reaching this conclusion. I perused a few parenting sites, all of which gave me information which I promptly ignored, and talked to other parents I knew within our local cinephile community. It was the latter who provided the most sensible pieces of knowledge including avoiding the temptation to see slightly older fare like Inside Out and picking a film with a short running time.

Approaching the theatre to see Minions a sense of dread quickly hit my wife and I. That sudden fear that hits when parents realized they will be trapped in a room with a bunch of sugar fueled toddlers. Though we enjoy a good animated film every now and then, we always venture to the evening screenings where the adults outnumber the kids. However, now we were in the danger zone. The mid-afternoon screening with youngsters who were one missed nap away from exploding into a tantrum. The concession stand alone was like a kindergarten class on the last day of school. Kids excited to get their hands on the kid’s combo, which came with one of six Minion cup toppers, incessantly nagging their parents until just the right Minion was in their hands. 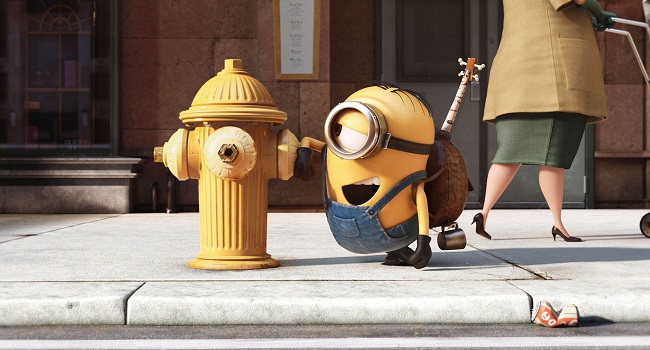 The only solace was the fact that the bulk of the rowdiest kids were headed to the 3D screening – which provided the youngsters with yet another opportunity to extort their folks to purchase the special Minions 3D Glasses for $10 – and not our lowly cinema that was showing only a 2D screening. While our screening was less crowded than anticipated, a bonus when you think about it, the cinema itself wore the battle scars of the previous shows. The minute we stepped into cinema 10 our feet stuck to the carpet as if it had been constructed out of flypaper. It felt like every inch of the wool carpet had witness a soda filled balloon fight.

In all of my worrying about if he would be able to handle the theatrical atmosphere, the one thing I failed to consider was the actual seating. Not quite heavy enough to keep the seat fully in down position, my son latched onto the armrests as if his life depended on it. None of this mattered once the sound system kicked in and the screen illuminated with a glow. As the overly long pre-show began my son sat mesmerized by it all.

Rarely looking away from the screen, except to locate any popcorn that fell in his lap, or to avert his eyes from the Shaun the Sheep trailer which oddly freaked him out, he sat hypnotized by the spectacle of it all. Throughout Minions he did not react much, except of course when a familiar face appeared at the end, and I began to wonder if he was even enjoying the experience? I know I did not care much for the film, but I knew I was never the target audience in the first place. Then it hit me that he was simply overwhelmed by it all. Not only was he taking it at all in, but he was learning how to react to what he was witnessing. I could not help but reflect on my first cinematic experience all those years ago. Was my face filled with the same sense of wonder and amazement? Did I enjoy the film because of the actually quality of the picture or was it just the sense of newness that was so appealing?

Only time will tell if my son will remember this experience as he gets older. For all I know another film may have a far more profound impact on his young film going life than the overall wearing yellow creatures who speak “Minionese.” Regardless, it was fascinating to watch him handle his first trip to the cinema like a champ. While the next milestone, the first day of school, quickly approaches, it was quite a treat to finally cross this one off the list.