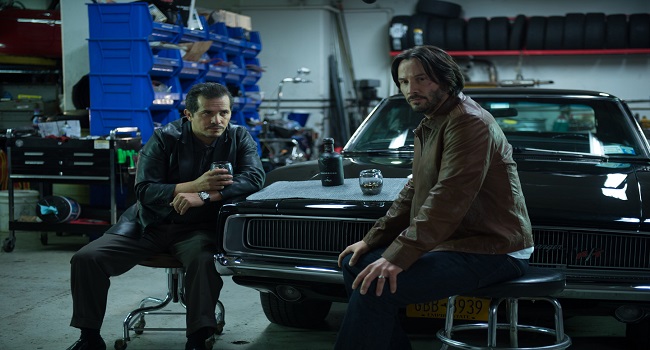 Rarely has two letters carried so much comedic weight in the world of action films as they do in John Wick. It is the response that is uttered from seasoned gangsters and young upstarts alike upon hearing that they have angered the Boogeyman. Actually it is worse than that. They have essentially pissed off the man they usually send to kill the Boogeyman.

Continuing the trend of recent action films that prove age is truly just a number, John Wick harkens back to that era where one went to an action movie for the violence not the plot. A time prior to the rise of the tough yet sensitive heroes that grace the silver screen today, when men and women of a particular skill set and singular vision kicked, punched, and shot their way to achieving their goals. The titular character in Chad Stahelski’s film is cut from this same cloth. Sure he may sulk around like a wounded puppy mourning the loss of his wife, but beneath the seemingly docile exterior is a hungry pitbull whose cage door is being held together with the flimsiest of threads.

Emotionally devastated by the passing of his wife, retired hitman John Wick (Keanu Reeves) only has the dog she bought him as a parting gift to provide him with solace. After a random encounter at a gas station with some Russian punks, led by cocky Iosef Tarasov (Alfie Allen), leads to his car being stolen and his dog killed, Wick sets out to right the wrong the only way he knows how. The son of notorious gangster Viggo Tarasov (Michael Nyqvist), whose empire Wick helped to build, Iosef has no idea the wrath he has unleashed on the family business by carjacking a man he thought was just an average schmuck. Determined to protect his idiot son at all costs, including issuing several high-priced contracts for Wick’s head, Viggo has no choice but to wage war against the one-man wrecking ball.

Taking the John Woo approach to action, in which every sequence plays like a finely orchestrated ballet of bullets, John Wick’s greatest strength is that it plays within the rules it establishes. Stahelski evokes a criminal world where honor among thieves is more important than one’s own kin. A point nicely punctuated by the presence of a hotel run by Winston (Ian McShane) that houses various contract killers passing through the city, but has a strict code against killing within the confines of its walls. There are no allusions of grandeur in John Wick, though the opening twenty minutes flirts with the possibility of something slightly deeper, this is a film all about seeing Wick exact his vengeance on a horde of unsuspecting foes one headshot at a time.

Stahelski’s years working as a stunt coordinator for a number Hollywood blockbusters really pays off in his directorial debut. The energetic action sequences are fluid and often mask the uneven nature of the script. While John Wick is not the type of film one goes into for the gripping plot, the shortcomings in the narrative are hard to ignore. Especially when you considered how underutilized many of the film’s talented supporting cast is – the lack of a true arc for a badass female character like Ms. Perkins (Adrianne Palicki) is one of the most grievous crimes the film commits.

Despite its deficiencies from a story standpoint, it is hard to deny that John Wick is one heck of an entertaining ride. Sure it is nothing more than a series of slickly produced action sequences, but that is exactly what one hopes for in a film like this. There is so much vibrant carnage on display that one can only utter “oh” with giddy, but exhausted, breath by time the final credits begin to roll.