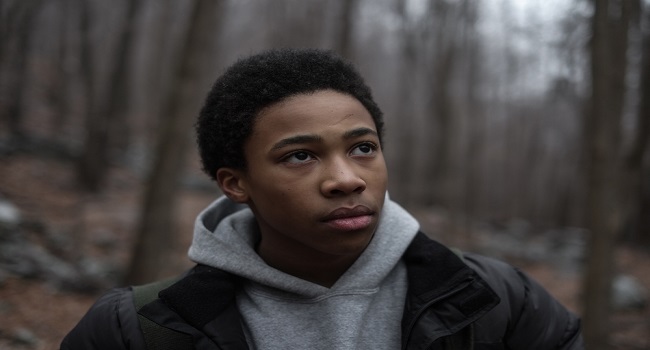 In Jonathan and Josh Baker’s meditative short Bag Man, we, the audience, are taken on tour from the streets of Harlem to the winter-ravaged woodlands of Upstate New York countryside. Our tour guide is a 12 year-old boy (Judah Bellamy) carrying a bag that he is very guarded about. As the film progresses the reason for the young lad fleeing the city, and the contents of the bag, become clearer as the boy inadvertently crosses paths with some shady individuals. An inventive and surprising short, Bag Man wears the cloak of a melancholy tale only to revel itself to be a rather intriguing, and understated, science fiction tale.

We are so wrapped up in the boy’s motives, and the world that he comes from, that it is shocking to see the subtle, but invigorating, turn the film takes in the final act. Considering the talented crew that the Baker brothers assembled, including cinematographer Nicolas Karakatsanis (Bullhead, The Drop), colorist Tom Poole (12 Years a Slave, Drive) and visual effects company Legacy Effects (Iron Man, Avatar) it is not surprising that the film is gorgeous to look at. However, it is the introspective emotion that the film stirs up that makes Bag Man truly mesmerizing. Bag Man is the type of short film that one cannot help but wish will be adapted into a feature one day.