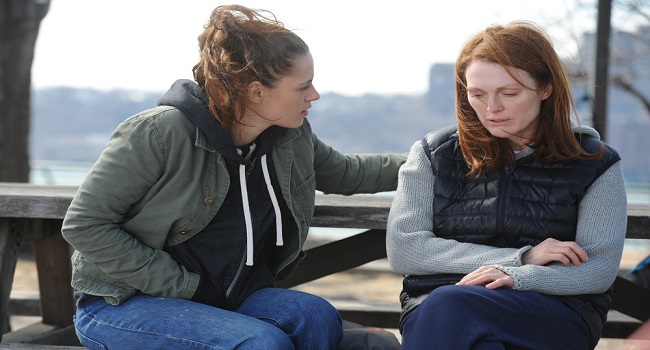 There is a moment in Still Alice where directors Richard Glatzer and Wash Westmoreland plant the camera over Alice’s (Julianne Moore) shoulder as she sits in a chair. In the background are blurred images of her husband and children in conversation at the dinner table. They talk frankly about Alice as if she is not even in the room. In some ways she is not. Her distressed eyes are focused, as if searching for something that is just out of reach, but clearly her mind is some place else. She has become a shell of the woman they have known and loved for years; replaced by a stranger whose void face now bears a harsh reminder of the cruel and inexplicable nature of life.

It is a scene that is all too familiar, uncomfortably so in fact, to those who have had Alzheimer’s stricken a family member. It is a simple, but powerful, moment that Moore plays perfectly. As she does with most of the film, Moore brings a subtle sadness to the scene. Though her family is discussing how Alice’s condition is impacting their lives, it is Alice herself who we feel most connected to. Alice brings a human face to the illness; showing what it is like for those suffering with the disease to watch their world quickly erode around them.

Based on Lisa Genova’s novel of the same name, Still Alice is a somber reminder that life can change on the dime for all of us. Dr. Alice Howland is a renowned linguistics professor at Columbia University who lives a rather comfortable life with her husband (Alec Baldwin). Amongst her many academic achievements, Alice takes great pride in the fact that her three grown children (Kristen Stewart, Kate Bosworth and Hunter Parrish) are rather well-adjusted. Alice’s serene life is abruptly rattled when she is diagnosed with early onset Alzheimer’s.

Arriving 15 years earlier than it does for most sufferers of the disease, Alice struggles to maintain a normal life. As the illness has a tendency to be accelerated in individuals who are of higher functioning intelligence, Alice and her family are not prepared for the swift decline of her mental state. Soon Alice begins forgetting simple things such as where the bathroom in her house is located and conversations she had moments earlier. Despite her determination to combat the disease, Alice knows that these are all signs of an uphill battle in which the odds are stacked against her. 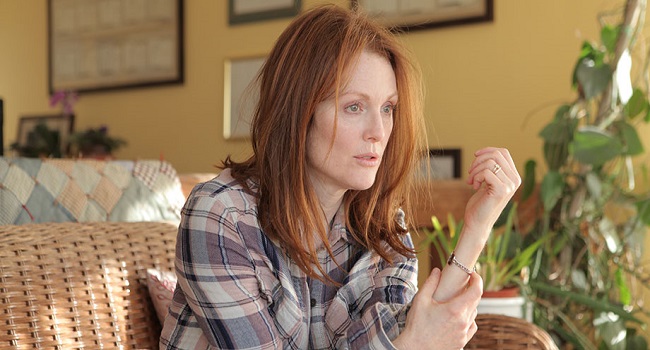 Still Alice is one of those films that essentially sinks or swims on the strength of the performances. Julianne Moore is sensational as Alice, bringing a bittersweet honesty to the role. Although the disease impacts Alice’s life faster than expected, Moore ensures that we have time to process every subtle change the character goes through. Every missing word hangs ominously in the air like dense fog, and Alice’s longing glaze, often devoid of recognition, is like an emotional punch to the gut. It is tough not to watch Moore embody the character without reflecting on those in our own lives who have battled with Alzheimer’s and other debilitating illnesses.

The downside is that once you look past Moore’s riveting work, it becomes apparent that Still Alice is not as tightly woven as it should be. While there is a rich honesty to the film, it is hard to shake the feeling that we have seen this all before. Glatzer and Westmoreland clearly understand the hardships that come with illness, but the film lacks that extra dramatic punch to truly make it soar. Instead it hits the familiar beats that one would expect. This is especially evident in how underutilized the supporting cast is. It is understandable that Glatzer and Westmoreland would give Moore plenty of room to develop the nuances of her character, but it is a shame that the likes of Baldwin and Stewart were not given meatier roles to chew on. As a result, Still Alice has several moments where the film is simply spinning its wheels in hopes of gripping onto one of Moore’s heartbreaking moments.

Without Julianne Moore’s restrained and moving performance, Still Alice would not be nearly as effective as it is. Sure the earnestness of it should be commended, but that alone does not make an engaging film. Glatzer and Westmoreland’s familiar rhythm needed a few more dramatic moments to give the film a much needed jolt of energy and pathos. Fortunately, Moore is at the top of her craft and is convincing enough to makes us forget the film’s shortcomings. She reminds us that, at the end of the day, it is the people who are afflicted with Alzheimer’s whose plight we should be trying our best to understand.