In Akira Kurosawa’s Ikiru there is a fate much worse than death. It is the realization of never truly living. Kurosawa’s film may not be subtle with its message but, as Ikiru deftly shows, life is far too short for restraint. Despite its measured pacing, there is a sense of urgency that flows throughout the film. Kurosawa gives the viewer a not-so-gentle slap in hopes of waking them up from the monotonous slumber that many of us call life. The fascinating thing about Ikiru, whose title translates to “to live”, is that it feels extremely relevant now as it probably did in 1952.

The unknowing medium for Kurosawa’s message is Kanji Watanabe (Takashi Shimura), a man who has spent thirty years working diligently at his government job. Never taking a sick day, and seemingly oblivious to the levels of bureaucracy that occurs in his office, Watanabe is forced to re-examine his life when an x-ray shows that he has stomach cancer. Though his doctor does not give him a specific time frame, Watanabe discovers that his symptoms are akin to those who are well past the curable stage. Realizing that he only has months to live, the devastated government employee struggles to come to terms with the fact that he has wasted his life away following a straight and narrow path.

Outside of his plaques for attendance and dedication, Watanabe has not really done anything of note in his work besides towing the government line. Furthermore, he has devoted his life to his son Mitsui (Nabuo Kaneko), who cares more about plotting how to spend his inheritance with his wife than he does about his father’s well-being. The only people who seem to take interest in the ailing man, or at least take pity on him, are a novelist (Yûnosuke Itô), who offers to take Watanabe for a drunken night on the town; and a co-worker (Miki Odagiri) whose youthful exuberance is entrancing. Through these encounters Watanabe discovers what his true purpose in life is and attempts to complete it before time runs out. 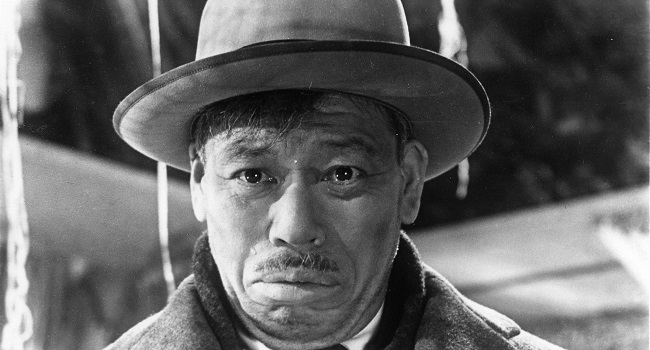 There is a bittersweet beauty to Ikiru that is as hard to shake. Similar to the effect Watanabe seems to have on everyone he encounters, even the joyous moments are laced with deep melancholy. A jaunty jazz club is brought to a somber halt as revelers are forced to contemplate their own mortality while a weary Watanabe sings, barely audibly, a song entitled “Life is Brief”. Even his young companion at one point complains about Watanabe’s sullen look making her feel uneasy. It is hard not to agree with her. With saucer wide eyes, that are caught in a perpetual state that lands somewhere between shock and sadness, it is hard not to feel depressed looking at the man. Even when he realizes his purpose, and sets off to achieve it, his facial expression is slightly more pleasant than that of a man marching off to his death.

Ever the crafty filmmaker, Kurosawa wonderfully juxtaposes Watanabe’s purposeful awaking with a group of young people singing “happy birthday” as the dying man makes his way down the stairs. It becomes clear that they are in fact singing to another patron that has entered the restaurant, but the image is a powerful one. Kurosawa continues this type of clash in the second half of the film which is told partly through flashbacks. He contrasts the various types of mourners at Watanabe’s funeral, some of whom are baffled by the local outpouring of love, with scenes of Watanabe breaking character, and fighting the internal government bureaucracy, to get a community park made.

Despite the somber subject matter, Kurosawa’s film is rather upbeat all things considered. Aside from incorporating a jazzy score every chance he gets, especially during the scenes on the town; Kurosawa has a lot of fun with moments such as when he follows a complaint, about a sewage issues, as it gets passed from one governmental department to the next, with no one wanting to take responsibility. Thanks in part to Kurosawa’s approach, not to mention Takashi Shimura’s great performance, Ikiru is a film that makes the viewer want to do something truly impactful after it ends. As we do not know when we will draw our last breath, it is important to, as clichéd as it may sound, live every moment to the fullest.