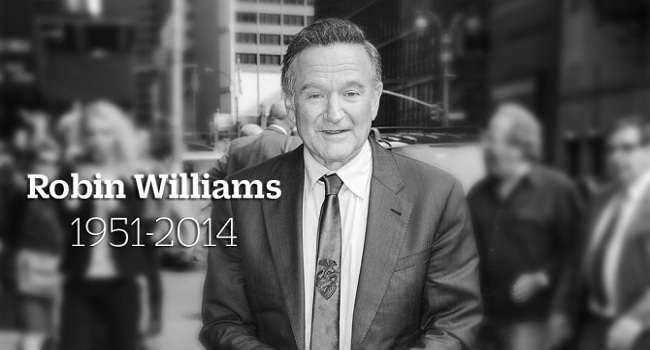 As I sit here this morning still trying to digest the news about Robin Williams’ death, I imagine many other bloggers penning similar pieces in tribute to the great, late actor. Hearing about a loss like this will affect any person who’s ever enjoyed a Robin Williams film. This news has left me feeling very low today. Perhaps it is because the larger than life personality of Robin Williams was allegedly snuffed out by suicide. That a man who exuded such joy could be plagued by a depression so deep as to take his own life is a tragic consideration.

I think about Robin Williams entertaining at 100-miles per hour—loud, fast and frenetic and I’m heartbroken at the thought of him now silent and still. There will forever be a void in the film industry without Williams’ force of nature. He was fiercely funny. He was super talented. He was a diverse actor with a great acting range. He could handle any script, proving himself capable of delivering exceptional performances in both comedy and drama. He was a superb improviser who could think on his feet to create funny unscripted movie moments and memorable quips during interviews.

I looked at his filmography and I was amazed. I was reminded of his impressive film successes including Good Morning, Vietnam, Dead Poets Society, Awakenings, The Fisher King, Aladdin, Mrs. Doubtfire and Hook. Top of mind for me is always his Academy Award-winning role in Good Will Hunting in which he delivered one of his best dramatic performances. I also fondly recalled a film of his that I’ve always loved—Jumanji. It may not have been one of his best, most famous or critically acclaimed roles, but the adventure film has always been a favourite of mine. Among his other impactful films to me are One Hour Photo and Insomnia, where in rare fashion; Williams portrayed deeply disturbing characters in two entertaining suspense thrillers. He lasted so long in the movie business because he was ever evolving and making different kinds of films.

Whatever the film, the stand-up comedy routine or the interview, Robin Williams left an indelible impression with every appearance he made. “I work for laughter, that’s my deal,” he once said. You did fine work, Robin. Thank you for the laughter, which, thanks to your films, will live on forever.