By all accounts How to Train Your Dragon 2 should have been one of the biggest films of the summer. Yet as I write this, the film has just barely made its money back domestically. I know we are now living in an era where the worldwide gross holds more weight in the eyes of studios, and by that marker the film is a moderate success, but the numbers are startling.

Frankly I am baffled by why the film is not bringing in repeat business in droves. It is exactly the type of big budget spectacle that so many claim they long for in their film going experience. A story filled with action and heart wrapped neatly in remarkable visual packaging. So what is missing from this film that other recent animated hits, like Frozen and Despicable Me 2, managed to tap into?

Was it the lack of a catchy song on par with “Happy” and “Let It Go”? Perhaps. I do not foresee the likes of Pearl Jam belting out soulful renditions of the music in Dragon like they did for Frozen’s infectious ditty. Though I think the lack of a goofy, but lovable, sidekick might somewhat contribute to the lukewarm response. There is no silly squirrel chasing after a nut, no yellow minions causing comedic havoc, and no snowman with a heart of gold helping to show characters the way.

Instead of embracing the ease of nonsensical humour, How to Train Your Dragon 2 has loftier ambitions. It wants to present an epic tale in every sense of the word. This is as much a film about family and sacrifice as it is a tale of decisions and consequences. Even the loveable dragon Toothless gets swept into, though not willingly mind you, the darker tones of the film. 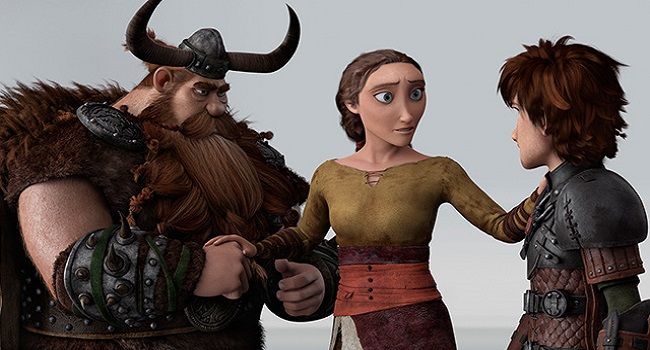 Set five years after young Hiccup (Jay Baruchel) and Toothless bridged the divide between Vikings and dragons, the village of Berk is now living in a happy co-existence with the winged creatures. While his father, Stoick (Gerard Butler), is eager to groom him to eventually take over his throne, Hiccup is more interested in exploring the uncharted areas of the world outside their village. It is on one of their many explorations that Hiccup and Toothless encounter a mysterious Dragon Rider who may be connected with the equally mysterious Drago (Djimon Hounson).

Ruthless and cunning Drago is a man who uses fear to evoke his power over others. Similar to a big game hunter, Drago is a collector of dragons. He has no interest in mounting their heads on a mantle mind you, but rather wants to use them as weapons. When Drago sets his sights on the numerous dragons that reside within the village of Berk, Hiccup and Toothless must do everything in their power to protect the peaceful existence in their land.

While the classic good versus evil storyline is presented in a much darker fashion this time around, what really makes How to Train Your Dragon 2 such an exceptional film is the way it captures Hiccup’s family dynamic. A fair portion of the first half involves Hiccup coming to terms with his long lost mother Valka (Cate Blanchett). Easily one of the most well-round, not to mention kick-ass, female characters you will see on screen this year, Valka brings an added layer of complexity to the film. Living years in isolation in a sanctuary for dragons, she gives motherly care to the fire-breathing creatures, but must wrestle with her guilt of abandoning her own son.

Her conflicted nature is perfectly contrasted with Hiccup’s own doubts about his ability to follow in his father’s legacy. They are two individuals bound by choices that have bigger reverberations than either one can anticipate.

The enormity of Hiccup and Valka’s choices are echoed in the jaw-dropping action sequences in the film. Frankly this is one of the most visually stunning I have seen in quite awhile. If there is one thing How to Train Your Dragon 2 understands in spades it is scale. Everything from the size of the battles to some of the dragons themselves needs to be seen to believe. As director Dean DeBlois’s lens swoops above, around, and through the centerpiece action sequence of the film, one is left in awe of the beauty of it all.

Despite the size and scope of the action and story, DeBlois manages to make it all feel contained. He ensures that the audience is always aware of where the other characters are on screen. Similar to Toy Story 3, How to Train Your Dragon 2 evokes a childlike sense of wonder, while still hitting deep emotional beats. It is a film that I will not only be revisiting, but also one that I cannot wait to introduce my own son to when he is older.