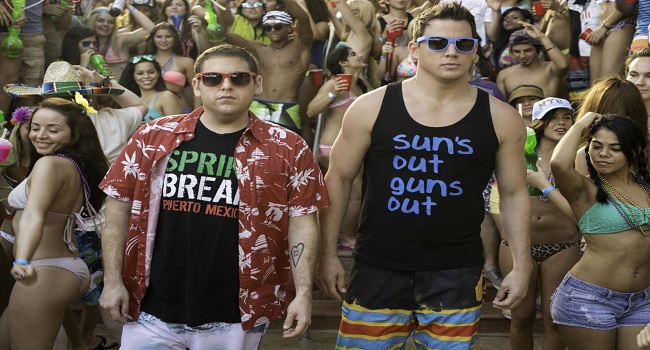 Inspired by the 80s television show of the same name, 2012’s 21 Jump Street involved two cops pretending to be high school students in order to uncover a drug supplier. The sequel 22 Jump Street is essentially a rehash of sorts of its predecessor. Directed once again by Phil Lord and Chris Miller, the story revolves around officers Schmidt (Jonah Hill) and Jenko (Channing Tatum) going undercover to stop a new drug circulating around college campuses. Despite its familiar premise, the beauty of the film is that it knows it’s rehashing itself while still managing to poke fun at the concept of movie sequels. Lord and Miller take many sly jabs at sequels including having Schmidt and Jenko be mindful of their spending on the investigation despite having a much bigger budget than last time.

In keeping with sequel tropes they bring back many of the familiar faces, such as Nick Offerman, Caroline Aaron, Rob Riggle, Dave Franco and Ice Cube as the often angry Captain Dickson, to reprise their roles from the original film. While the returning cast is a treat, it is Peter Stormare who is the real standout in the film. Stormare is wonderful as the villainous old-school drug dealer named Ghost, a man who misses the days of the 90s when people did cocaine and such.

Ghost is connected to a new drug called WHYPHY that is about to break onto the college scene and it’s up to Schmidt and Jenko to stop it. Of course, the only way for the pair to achieve this is to immerse themselves in the world of college. Jenko is immediately accepted by the jocks while Schmidt befriends an art student named Maya (played wonderfully by Amber Stevens). Unfortunately for Schmidt, in order for him to get closer to Maya, he must also put up with her creepy and antagonistic roommate named Mercedes (played by scene stealer Jillian Bell). 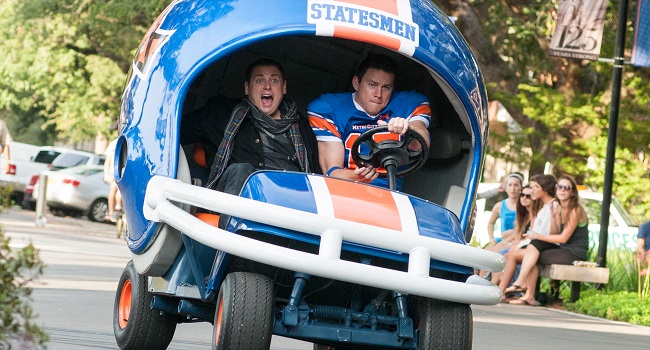 Interspersed with all the comedic nods to college life is the continuing bromance between Schmidt and Jenko. Tatum and Hill aren’t afraid to showcase some homoerotic tendencies in terms of their bromance either. Tatum starts to become very hesitant while Hill is becoming clingier. Lord and Miller also have a lot of fun playing with many of the bromance tropes we have come to expect from buddy comedies. A perfect example of this can be found in some buddy-cop poses that are included in the Michael Bay-esque action sequences.

At times, Lord and Miller’s idea of humor straddles the line between childish and witty. This is shown in the hilariously awkward scene involving Schmidt attempting to imitate a Mexican accent. There are also some funny moments involving Tatum’s character encountering his equal in a jock named Zook (played by Wyatt Russell). Raising inner conflict regarding the fact that Jenko is both a cop and somewhat of a man-child as well. Even Ice Cube gets in on the comedic fun as he is given more to do this time around instead of simply being very abrasive and berating Schmidt and Jenko like in the original. There’s a hilarious scene which involves Captain Dickson making an unfortunate discovery while having a meltdown in front of everyone, including his wife played by a famous rapper.

Another notable moment in 22 Jump Street is the films’ closing credits which perfectly spoofs film franchises. In some respects, Lord and Miller both play into Hollywood’s desire for quick cash from recognizable brands while simultaneously pointing out how silly it is. The reason why 22 Jump Street is an excellent film is that it refuses to take itself seriously while still finding a smart way to appear dumb. It’s amongst the crop of comedies that doesn’t talk down, or be too smart for, its audience but rather gives them a hilariously good time.