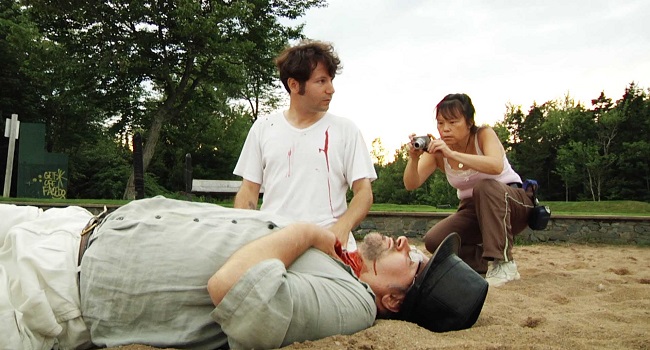 Peddling his own brand of no-budget action flicks, or “respectable cheese”, outside local video stores, Elliot Scott is driven by his dream of becoming Canada’s first action hero. Hoping to turn his martial arts prowess into international stardom like his idols Chuck Norris and Jean-Claude Van Damme, Halifax based Scott gives himself completely to each film he makes. Working a new project entitled Blood Fight, his third and most ambitious film to date, Scott is convinced he has found the formula to roundhouse kick the doors to fame wide open. This is assuming, of course, that he can survive the numerous obstacles and blunders that come with the production.

Despite achieving local success with his first genre film They Killed My Cat, it quickly becomes evident watching Kung Fu Elliot that Scott’s directorial eye, and acting skills for that matter, leaves a lot to be desired. If not for both his loyal quirky cast and devoted girlfriend Linda Lum, who serves as his cinematographer/producer amongst other roles, it is doubtful that the lovably goofy Scott would have even mustered enough material to get one film made. Kung Fu Elliot takes great pleasure, and so do we, in watching Scott bumble his way through the production of Blood Fight. However, the film reveals itself to be much more complicated than the American Movie style comedy it appears to be on the surface.

At Kung Fu Elliot’s core is an interesting character study of a couple struggling to find the balance between dreams and reality. Scott is clearly the dreamer of the duo. He claims to want to marry Lum, but cannot even manage to hold down a paying job to afford a ring. Furthermore, he is so consumed with his own perceived stardom that even educational trips abroad become platforms for blatant self-promotion. This is a direct contrast to Lum who, while supportive of Scott’s goals, is the more practical one in the relationship. She struggles with living with a man who does not even seem motivated to contribute financially to the household. At times their relationship seems more frustrated mother/wayward child than traditional girlfriend/boyfriend.

This becomes especially evident in the film’s jaw-dropping final act that forces us to question everything we have observed to that point. Directors Matthew Bauckman and Jaret Belliveau skillfully pull the rug out from under us to unveil the dark undercurrent that has been flowing underneath the film’s humorous demeanor the entire time. Equally hilarious and shocking, Kung Fu Elliot is a film with far more depth than its humorous exterior suggests. Bauckman and Belliveau construct a truly fascinating film about a man so immersed in his dreams that he can no longer see the path to reality.