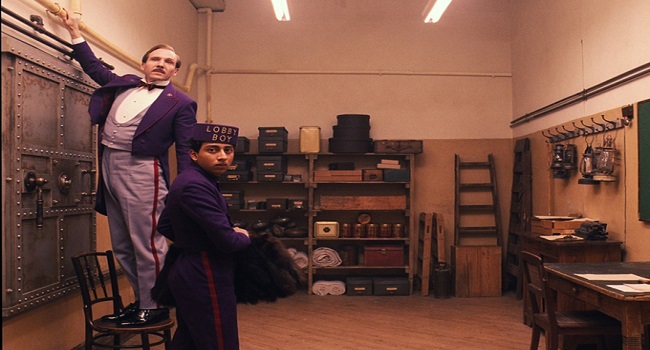 Inspired by the works of Stefan Zweig, The Grand Budapest Hotel is a story about a concierge at a prestigious Eastern European hotel in 1932 who finds himself accused of murder. Written and directed by Wes Anderson, The Grand Budapest Hotel is an ambitious film that features many of the traits Anderson has become known for. However, this time around he brings a unique approach to the film by playing with different framing aspect ratios. Since the story takes place in three different periods of time, Anderson shot the 1932 scenes in full-frame aspect ratio while the scenes set in 1968 and 1985 are shot in two different widescreen formats.

Set in the fictional European country of Zubrowka, on the cusp of war and poverty, the film’s narrative is largely told from many different perspectives. The story begins with a young girl reading the memoirs of by a man simply known as The Author (Tom Wilkinson and Jude Law play the older 1985 and younger 1968 versions of the character respectively). It is soon revealed in the memoir that when The Author was a younger he met a man named Zero Moustafa (played by F. Murray Abraham) who had quite a story to tell. Zero recounts the tale of the prestigious Grand Budapest Hotel which was run by a charming concierge, Gustave (Ralph Fiennes), who happened to take a young Zero Moustafa (played by Tony Revolori) as his protégé.

Things get rather eventful at the hotel when Madame D (Tilda Swinton), whom Gustave had romanced, dies unexpectedly. Gustave ends up inheriting a prized painting much to the dismay of Madame D’s son Dmitri (Adrien Brody). Believing that Gustave murdered his mother, Dmitri is determined to see Gustave sent to prison for his alleged crime. This forces Gustave, with the help of Zero and a young baker named Agatha (Saoirse Ronan), to do whatever it takes to prove his innocence. 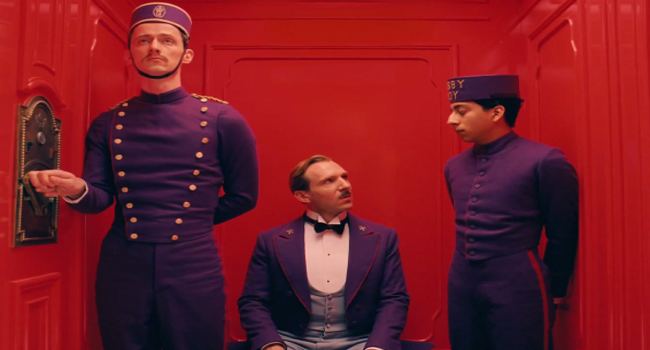 The Grand Budapest Hotel is a film that meshes various genres ranging from a prison-break film to romance to comedy. Despite the numerous tones touched on, Anderson’s quirky and fluid style is still as potent as ever. His approach to framing and keen eye for detail are nicely complemented by Robert Yeomen’s cinematography, Adam Stockhausen’s set design, and Milena Canonero’s costume design. The use of colors allows the hotel to seem like it is a character in the film, instead of just the setting. Anderson also give the fictional country of Zubrowka a special feel through his use of miniatures, stop-motion animation, and a few computer based visual effects.

It’s not just Anderson’s direction and the technical aspects, including Alexandre Desplat’s very vibrant score, which makes the film so enjoyable. The ensemble, which features Anderson regulars such as Bill Murray, Jason Schwartzman, Adrien Brody, Willem Dafoe, Jeff Goldblum, Bob Balaban, Tilda Swinton, Edward Norton, Harvey Keitel, and Owen Wilson all seem to be having a wonderful time. Swinton in particular is very exuberant playing Madame D. Both Brody and Dafoe provide several devilishly hilarious moments as Dmitri and Dmitri’s bodyguard, respectively. Yet, one of the real standouts in the cast is Saoirse Ronan as the young baker Agatha, who ultimately falls for the young Zero.