After penning the Academy Award nominated A Prophet, screenwriter Abdel Raouf Dafri returns with a gripping slow burn thriller based on Marc Fievet’s autobiographical book “L’Aviseur.” Set in the 1980s Gilbraltar, the story revolves around Marc Duval (Point Blank’s Gilles Lellouche), a man drowning in debt who finds himself clinging to a fragile and increasingly dangerous life raft. Running a bar, and $100,000 in debt, Duval is at a loss as to how to keep his business afloat and provide for his family. So when a French customs agent, Redjani Belimane (Tahar Rahim from A Prophet’s and The Past), comes a calling with an offer to pay off his debt, Duval finds this too tempting to refuse.

Since Gibraltar is a hotbed for drug trafficking and illegal smuggling, which neither the French nor the British can stop let alone slow down, Duval’s bar sees it fair share of shady customers. All Belimane seeks in return for his financial salvation is for Duval to become a snitch for French customs. He is asked to simply pass along any information that he might happen to overhear and aid customs in nabbing a few big busts to showcase on the nightly news.

Of course, as is the case when dealing with both government and criminal organizations, the tides change from smooth sailing to turbulent waters for Duval rather quickly. His on the nose intel not only attracts the attention of British customs, but also sparks suspicion from many in the criminal world. Specifically a volatile Irish thug, Bobby Sims (A History of Violence’s Aidan Devine) and a crafty Italian smuggling kingpin, Claudio Pasco Lanfredi (Riccardo Scamarcio). Delicately navigating through a fragile web of allegiances, Duval finds both his life and his family’s in increasingly more danger with each passing day. 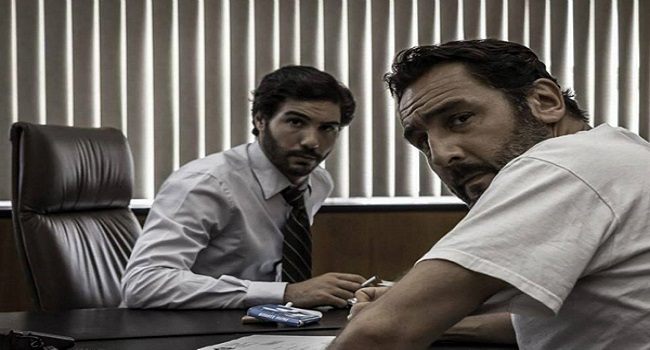 Director Julien Leclercq creates a taut film that is both visually striking and immensely captivating. Taking its time to unfold, The Informant does a great job of highlighting the complexities of the war on trafficking. Leclercq shows that getting the drugs off the street is only a minor concern for government agencies that care more about public perception. The real victims in all of this are both those who use the drugs being smuggled and the snitches like Duval who do not even realize when they are being used.

Gilles Lellouche does a good job of conveying a man who has no idea of the magnitude of his situation until it is far too late. A mere pawn in the trenches of a ruthless battle of political and criminal powers, Lellouche portrays Duval’s spiral with the right measure of desperation. Tahar Rahim is also quite strong as the cold calculated customs agent. Despite a few key scenes towards the end, it is clear that he has no qualms about hanging Duval out to dry if need be. The same can be said for Riccardo Scamarcio’s Lanfredi. Like a venus flytrap luring a fly to its death, Lanfredi quickly and calmly wraps a deadly grip around Duval and his family. He is a chilling villain not when he is at his most boisterous, but rather in the quiet moments where you know his brain has worked out all the possible angles.

Slickly constructed and simmering with tension, The Informant is a slow burn thriller that delivers everything you would hope for and more.