At one point or another we have all had that insatiable inkling to leave. To hop in the car and drive away leaving everything that is impeding on our happiness behind. Few of us have the guts to go through with it though as fear, responsibility, and a plethora of other reasons causes us to slam on the breaks. However, it is always intriguing when someone actually takes that leap.

In Emmanuelle Bercot’s On My Way, we get to witness the ramifications of this type of in impromptu journey through Catherine Deneuve’s luminous eyes. Deveuve plays Bettie, a woman in her 60s whose life is seemingly crumbling around her. Or at least that is the way it feels when Bettie discovers, via her overbearing mother, that her married lover has finally left his wife…for a much younger woman. Distraught, Bettie walks out on the family restaurant she manages and just starts driving.

Bettie’s intentions are simply to take a few moments to collect her thoughts. However, when she runs out of cigarettes, Bettie inadvertently finds herself on a journey that will not only have her interacting with various individuals in rural France; but also force her to confront aspects of her life that she can no longer ignore.

The most fascinating element about On My Way is the way in which Bercot’s uses non-actors to play many of the characters that Bettie interacts with on the road. This yields some rather interesting, and at times humorous, results in the first half of the film. Moments like the cigarette rolling scene, the one-night stand and the encounter with the security guard really resonate. Thanks to Devenuve’s fine performance, Bercot is able to effectively sell the overall sense of spontaneity that the film is trying to evoke. 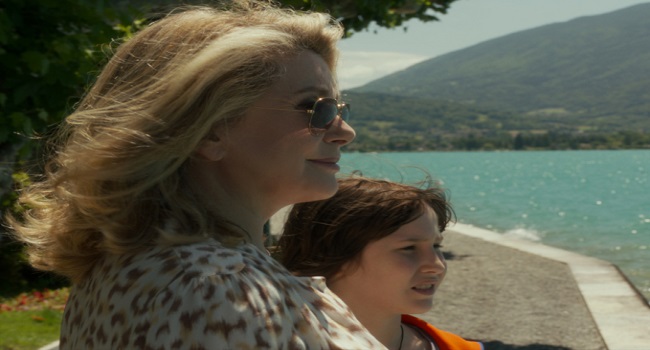 Unfortunately, the reliance on non-professionals also has somewhat of an ill effect on the film as well. The individual, and loosely connected, encounters often feel more engaging than the film as a whole. This is mainly a result of how Bercot’s chooses to dissect Bettie’s history up to this point. Opting to slowly unravel key events in Bettie’s past, Bercot does not provide enough intrigue or incentive for us to follow the breadcrumbs she drops.

Furthermore, the more we travel on the adventure with Bettie, the more it becomes evident how relatively conventional the film really is. This is especially noticeable in the latter half when Bettie agrees to drop off her grandson Charly (Nemo Schiffman), to his grandfather on his father’s side. The scenes with Charly, right down to bratty child covering for the caregiver to his mother, feels acutely orchestrated compared to the free-form sections of the film.

Despite its interesting approach in regards to using non-actors and Catherine Deneuve’s strong performance, On My Way does not quite live up to its full potential. Like its central character, the film makes a few bold choices but ultimately settles for a safe and conventional rhythm.