As a Canadian, being a fan of hockey was imprinted on me from birth. Given our country’s history with the sport, it is no surprise that whenever the Winter Olympics come around most of us obsess about when, not if, Canada will claim gold. Our overconfidence as a nation when it comes to hockey is usually our biggest downfall. We tend to underestimate the fact that in sports, and life in general, things rarely go as planned. Even if the final result is what was predicted, the path to it is filled with various sharp turns and bumps along the way. As I drove to work yesterday, listening to numerous radio commentators predicting that the Canada versus Latvia Olympic playoff match would be an ”easy game” for Canada, I could not help but think that it was a bad omen. Like jocks in a locker room these individuals where no even taking the underdog seriously…which is always a big mistake.

The underdogs are the ones who make the Olympics so captivating in the first place. We love cheering for those who, with a little heart and grit, defy the odds in the face of insurmountable adversity. While Canada did manage to, barely mind you, squeak out a 2-1 victory. I could not help but be impressed by Latvia’s effort overall. They nearly pulled off a David versus Goliath upset that would have shaken the foundation of life itself…at least in Canada.

In keeping with the underdog theme, here are six underdog stories in sports films that I enjoy. Using the Six Degrees of Separation game as a model, each film listed will have a link to the film directly beneath it in six moves or less.

Reason to see it: An underdog story that pleases both children and adults without talking down to either demographic. Plus, the film paved the way for The Sandlot, The Mighty Ducks and every other kid-centric team sport film.,

Rocky
Synopsis: “Rocky Balboa, a small-time boxer gets a supremely rare chance to fight the heavy-weight champion, Apollo Creed, in a bout in which he strives to go the distance for his self-respect.”

Reason to see it: It is one of the top five iconic boxing films of all time. Nominated for ten Oscars, and winning three, the film serves as a reminder of a time when Sylvester Stallone was taken seriously as an actor and writer.

Dodgeball: A True Underdog Story
Synopsis: “A group of misfits enter a Las Vegas dodgeball tournament in order to save their cherished local gym from the onslaught of a corporate health fitness chain.”

Reason to see it: Of Ben Stiller’s batch of silly comedies, this one makes me laugh the most. Plus, I know several people who started playing in “serious” dodgeball leagues after seeing this film.

Six Degrees Total: 2. Jason Bateman, who has a cameo in the film, starred in 2013’s Identity Thief alongside Melissa McCarthy and Jon Favreau. In 1993, Favreau had a major role in the film Rudy.

Rudy
Synopsis “Rudy has always been told that he was too small to play college football. But he is determined to overcome the odds and fulfill his dream of playing for Notre Dame.”

Reason to see it: Sometimes it is not all about winning, but simply about getting respect. This is one of the few films where merely being allowed to live your dreams for a few brief minutes is considered the greatest triumph.

The Karate Kid
Synopsis “A handyman/martial arts master agrees to teach a bullied boy karate and shows him that there is more martial arts than fighting.”

Reason to see it: The “crane kick” is still one of the greatest action sequences of my childhood…completely ineffective in a street fight, but that is a minor detail. Apologies to Will Smith and clan, but there is only one Karate Kid…let us never speak of the Hillary Swank version ever again.

Six Degrees Total: 3. Ralph Macchio had a role in 1992’s My Cousin Vinny which starred Joe Pesci and Marisa Tomei. In 1992, Tomei played a role in Chaplin alongside Robert Downey Jr. and Moira Kelly. Although she had a small role in Billy Bathgate, Moira Kelly’s big breakout role was in 1992’s The Cutting Edge. 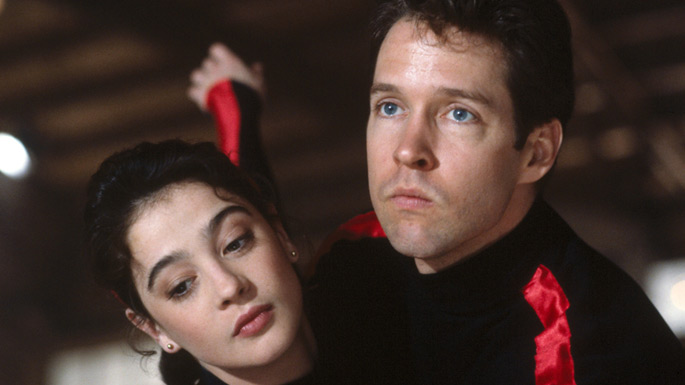 The Cutting Edge
Synopsis “A hockey player must team up with a figure skater in hopes of realizing their individual Olympic dreams.”

Reason to see it: Let me put aside my “man card” for a moment and say I still find this film charming. It is the only film about figure skating you will catch me watching.

WHAT SPORTS FILMS ABOUT UNDERDOGS DO YOU ENJOY?