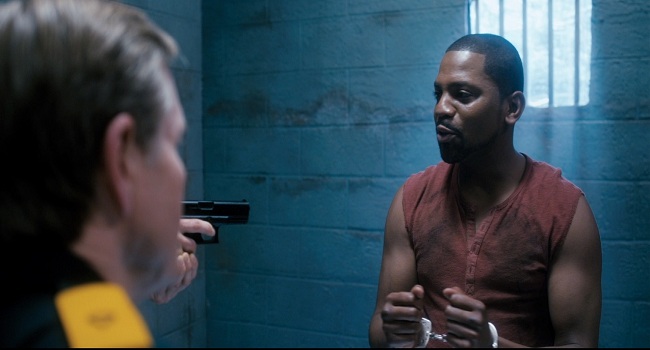 There is a moment early on in The Suspect when a racially charged tête-à-tête takes place between a handcuffed man, Freeman Finch (Mekhi Phifer), and the local cop, Sheriff Dixon (William Sadler), who arrested him. A robbery has taken place, the first in this small all-white southern town’s history, and Finch knows that the dark colour of his skin is the only reason he is being detained as the primary suspect. Of course Sheriff Dixon is purposely tiptoeing around this fact, carefully not wanting to be seen as the racist he truly is. However, within this verbal battle of racial wits one question still remains…who robbed the bank?

The answer to that, it turns out, is far more complicated.

To unlock the mystery of the robbery, and The Suspect as a whole, one must follow the intricate twist and turns that are found on the road to the truth. Making his debut feature, writer/director Stuart Connelly structures his taut pot boiler in a fashion that immediately sinks its hooks into you. You are never sure who you should trust even as Connelly slowly unfolds the backgrounds of Finch and his colleague (Sterling K. Brown), a man who Sheriff Dixon knows nothing about.

Though the first half of the film is tightly constructed, The Suspect does get tangled in its own intricate web as the film goes on. It is one of those films that is slightly overstuffed by one or two twists too many. Connelly has a lot of great ideas, but not all of them fit well within the main narrative of film. After a while it not only becomes a struggle to ignore the implausibility of some of the leaps in logic; but the forced sentimentally of the last act overshadows many of the building blocks that made the first section so intriguing. 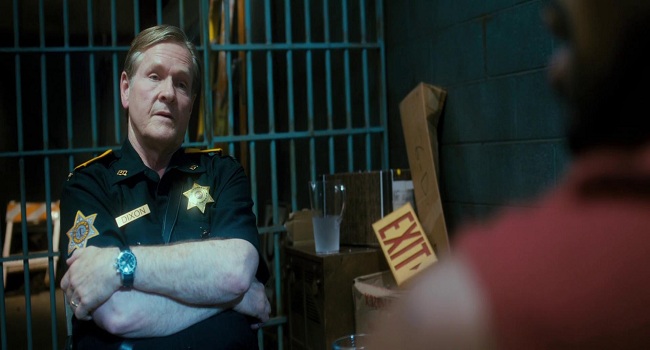 Fortunately, the thing that keeps The Suspect afloat during its weaker moments is the strong performances of the principle cast. Mekhi Phifer brings a lot of nuance to his role. Finch is a man who feels that he has all the angles covered, but is ultimately clouded by his sense of desperation. He is matched perfectly against William Sadler who, despite not always seeing the forest through the trees, is crafty enough to understand how to exploit any given situation to his advantage.

The solid performances, coupled with a really intriguing premise, are what make The Suspect worth seeing. It is a film that is at its strongest when you know very little, trust me avoid the IMDB synopsis, as possible going in. Despite the flaws that occur in the latter half, Stuart Connelly shows a lot of promise as a director. The Suspect is a good looking film that is filled with several solid ideas. It is just a shame that it does not all come together as well as it could have.